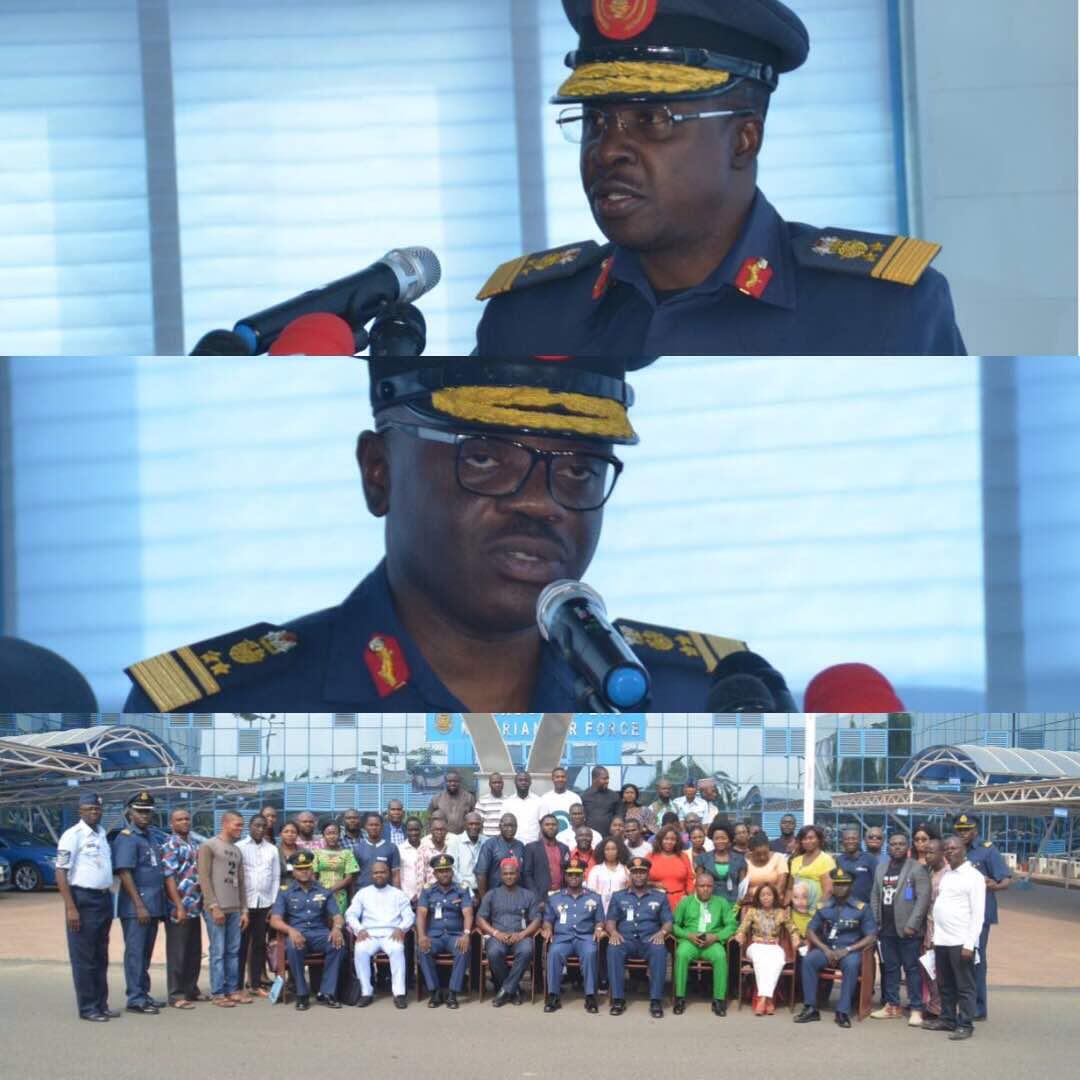 The Directorate of Public Relations and Information (DOPRI) at Headquarters NAF, Abuja, organized the workshop, which witnessed a large turnout of journalists from different media organizations covering the Defence beat.

The workshop was aimed at better equipping Defence Correspondents with requisite skills and updated knowledge on the application of air power.

The enlightenment workshop was also intended to acquaint Defence Correspondents with various air power terminologies in a bid to enhance professionalism in the reportage of NAF events thereby projecting the NAF in a more accurate and balanced manner.

Declaring the workshop open, the Chief of the Air Staff (CAS), Air Marshal Sadique Abubakar, who was represented by the Chief of Administration, Air Vice Marshal Ibrahim Yahaya, stated that information management in contemporary times is critical to national development.

He added that the way information is processed could affect national security either positively or negatively.

“Therefore, a Defence Correspondent must understand the terminologies associated with his beat to enable him report events professionally”.

The CAS enjoined Defence Correspondents to make good use of the opportunity offered by the Workshop to acquire pertinent knowledge about the NAF.

According to him, there is a growing need for journalists to understand the nuances and technicalities involved in air operations as the nation strives to maintain peace in the country.

In his welcome address, the Director of Public Relations and Information (DOPRI), Air Vice Marshal Olatokunbo Adesanya, commended the media for their dedication in covering and reporting military activities.

He pointed out that the workshop could not have come at a more appropriate time than now, as public expectation of accurate and timely dissemination of information on NAF operations across the country is on the increase.

According to him, the nature of warfare has assumed a new dimension and therefore, accurate reportage of NAF air operations would prevent avoidable controversies.

He then expressed his appreciation to the CAS for his strategic guidance, which led to the conduct of the workshop.

During the one-day workshop, resource persons, all of who are specialists from the NAF, presented 5 papers.

The topics of the papers include ‘NAF Hierarchy and Rank Structure’, ‘Characteristics and Limitations of Air Power’ as well as ‘Aircraft types in the NAF Inventory and Roles’.

The 2 other papers were ‘Armaments on NAF Aircraft’ and ‘Military-Media Relations’.

While speaking on ‘Military-Media Relations’, Air Vice Marshal Adesanya charged the media to be even more professional in their reportage while also remaining conscious of the need to uphold integrity.

The DOPRI stated that the media are veritable partners in national development and as such, “patriotism should override sensationalism and commercialism in the course of practicing journalism”, he added.

Speaking further, he said the media should always work together with the military, especially now that the nation is experiencing various security challenges.

“The responsibility of fighting security challenges in the country should not be left in the hands of the military only, the media could also help through the quality and contents of their reportage”, he said.

In addition, the DOPRI said that journalists should not allow themselves to be unwittingly used as tools in the hands of insurgents to propagate fear and terror.

Rather, journalists should be more conscious of their onerous responsibility as critical stakeholders in the fight against insurgency and terrorism.

Participating Defence Correspondents expressed their delight at the opportunity to attend the Workshop, which they described as being “quite informative and eye-opening”.