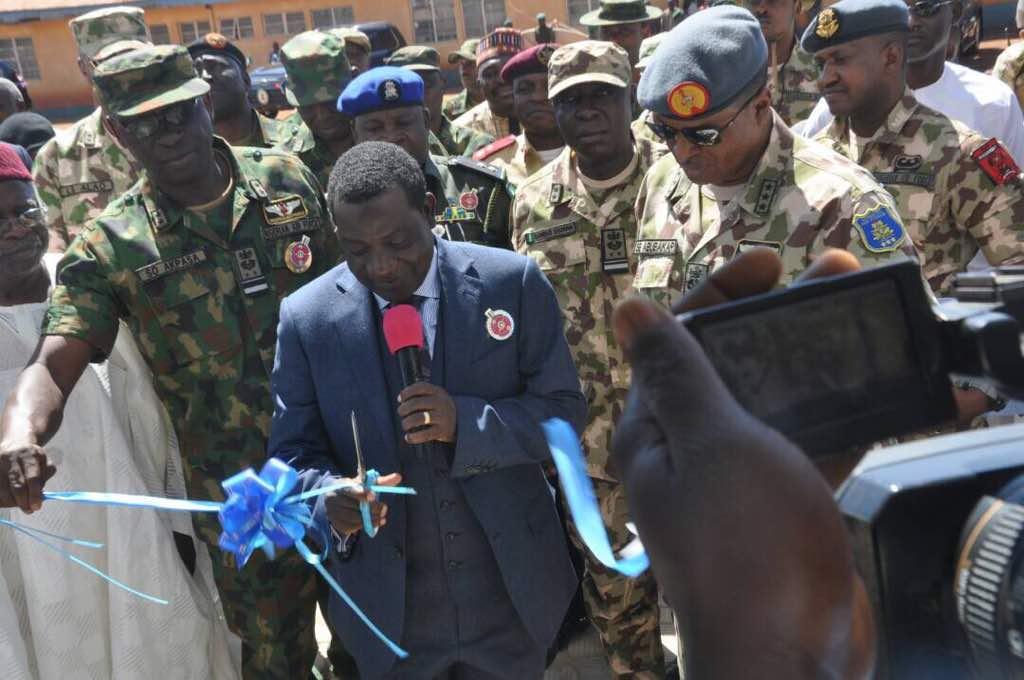 Also commissioned was a block of 30 by one bedrooms fully furnished residential accommodation, which was named after NAF00/20247 Late Cpl Timon PM, who paid the supreme sacrifice on 27 July 2012 while fighting insurgency and terrorism as part of Operation Zaman Lafiya.

The newly commissioned girls’ hostel at AFGCS Jos is designed to accommodate a maximum of 64 final year students while the new residential block would accommodate 120 airmen/airwomen of 551 NAF Station Jos.

Guest of honour at the commissioning ceremony, Governor Simon Lalong of Plateau State, who commissioned the two projects, commended the consistency and painstaking efforts of the Chief of the Air Staff (CAS), Air Marshal Sadique Abubakar, in ensuring that all personnel of the NAF are decently accommodated.

He also expressed his delight as he inspected the newly built girl’s hostel stating that “this is nothing but an enviable edifice any parent would want his or her daughter to live in”.

The Governor added that the people of Plateau State would continue to be grateful to the NAF for its role in protecting lives and properties in the State.

According to him, “The recent establishment of 205 Combat Search and Rescue Group and the pace of ongoing construction works at the site of the new unit in Kerang is an evidence of the sincere concern of the CAS for the security of lives in the State”.

Earlier in his remarks, the CAS noted that the completion of the two projects was another giant stride towards the accomplishment of NAF’s objective of improving the welfare of personnel for enhanced professionalism and service delivery.

“It is also part of our deliberate effort at enhancing the quality of boarding facilities for the students’ in NAF schools with a view to creating a very conducive atmosphere for learning.

Accordingly, the NAF maintains, as part of its policy thrust, a commitment to welfare and infrastructural development aimed at positioning its personnel for effective response to Service exigencies”, the CAS added.

Air Marshal Abubakar also stated that, as a result of the aggressive infrastructural development in the NAF, over 75 per cent of its personnel are now accommodated in the barracks as against 45 per cent in July 2015.

In addition, the CAS said that the ability to concentrate a larger number of the Service’s workforce in the barracks was a significant advantage in terms of response to emergencies, regimentation and esprit-de-corps among personnel.

He therefore promised that the NAF would continue to place premium on addressing its infrastructural deficits with the objective of creating the enabling environment and motivation for effective and efficient operations by its personnel.

The CAS had earlier on paid a courtesy call on Governor Lalong immediately after landing at the Jos Airport.