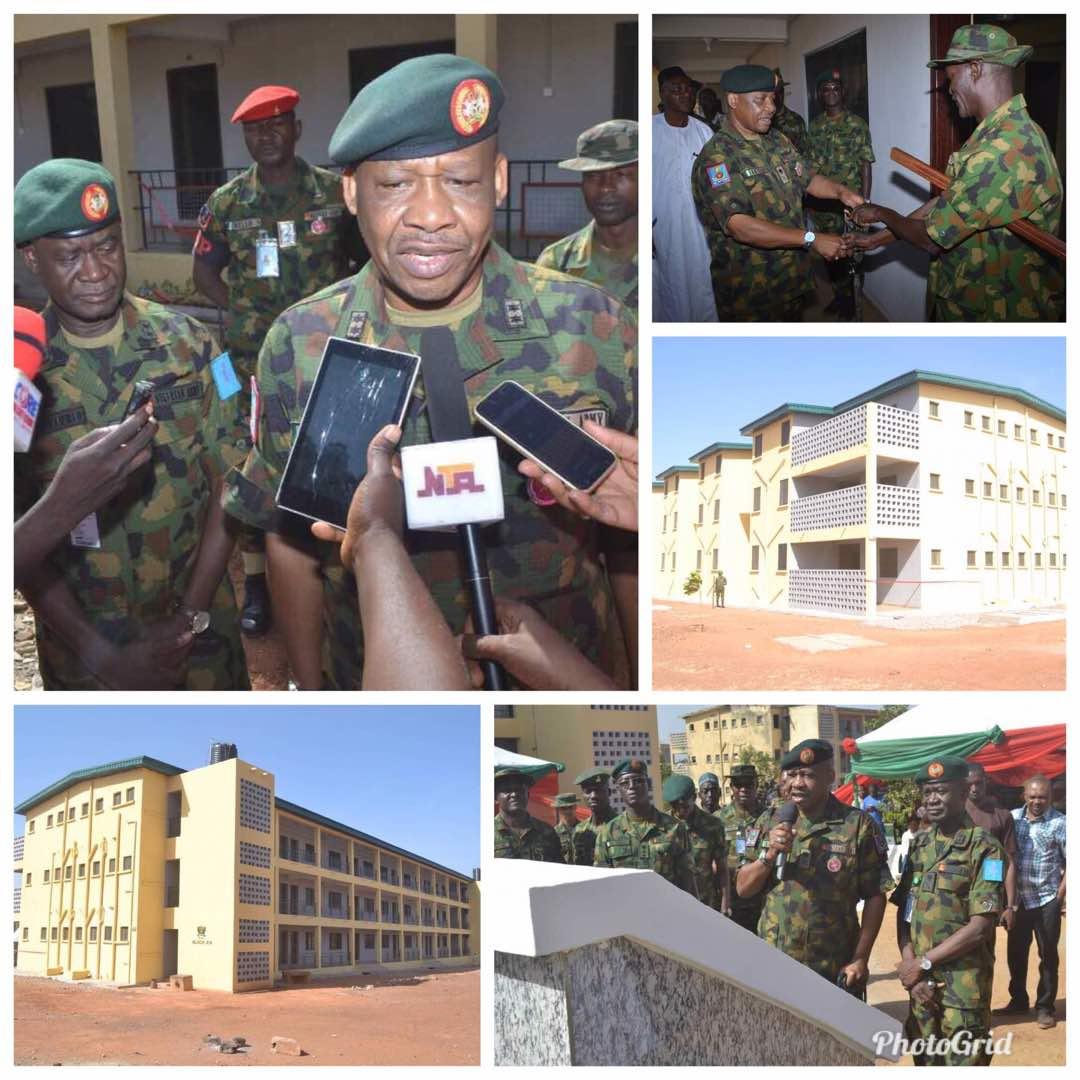 The Chief of Army staff, Lt. General Tukur Yusuf Buratai has commissioned two blocks of 30 units and 15 units of flats remodeled and renovated by Nigerian Army Intelligence Corps (NAIC) for its Senior Non Commissioned Officers (SNCO) at the Ribadu Cantonment.

Represented at the ceremony by the Director of Military Intelligence, Major General AA Tarfa, Lt. Gen. Buratai described the timely completion of the remodeled and renovated NAIC Senior and junior non-commissioned officer’s quarters in record time as an epoch making event.

The DMI said, “The Chief of Army Staff authorized me to commission this remodeled and renovated NAIC Junior and Senior Non-Commissioned Officers Quarters in Ribadu Cantonment”.

“It is also a moment of unquantifiable joy for the NAIC soldiers and their families, considering the deplorable state was, before what we are seeing today”.

“I will at this juncture I will respectfully crave your indulgence to take a trip down memory lane by giving you a short background on how this project came to fruition”.

“Sometimes in June this year, I approached the COAS and brought to his attention, the dilapidated state of the 2 blocks being commissioned today”.

“The blocks were barely habitable and there were fears the building could collapse at any time”.

“In line with his vision ‘To have a professionally responsive Nigerian Army in the discharge of its constitutional roles’ of which welfare is a key component, the COAS immediately approved funds for the complete renovation and remodeling of the buildings despite scarce resources and competing demands”.

“This would not have been possible without the timely authorization of releases of funds by the COAS which once again emblematizes his commitment to the welfare of officers and soldiers of the Nigerian Army”.

The remodelled blocks to be commissioned today, comprises 15 and 30 rooms respectively and is being occupied by soldiers serving in 1 Military Intelligence Brigade and other NAIC units.

The project entailed complete change of doors and windows, re-tiling, re-roofing and complete makeover of the toilet, plumbing, electrical fittings and wiring.

The project was completed within a record period of less than 3 months through Direct Labour using local materials with no quality comprised.

“On a lighter mood, recent intelligence report reaching me has revealed that this edifice I am about to commission today, has without permission and following due process already, has been unofficially christened ‘Buratai Missions’ by Okada Riders in Ribadu Cantonment”.

“I have not ordered for their arrest because I can understand their enthusiasm to immortalize the COAS as well as appreciate this noble gesture”.

“Today is the turn of the soldiers of the Nigerian Army Intelligence Corps. I therefore wish to take this opportunity to enjoin all personnel of the Corps to redouble their commitment and work assiduously within the context of the Chief of Army Staff’s vision to ensure national security”.

“After all, to whom much is given; much is expected. I also want to enjoin lucky occupants of the renovated and remodeled blocks to ensure they maintain the building and avoid acts such as illegal connections and unauthorized modifications that would compromise its integrity and aesthetics”.

“At this juncture I would like to commend the team that remodeled and renovated the blocks about to be commissioned for their competency and timeliness which buttresses their professionalism”.

“They have indeed added value to the quality of life of the inhabitants of the renovated blocks as well as the aesthetics of Ribadu Cantonment”.

“On this note, I will like to on behalf of all officers and soldiers of NAIC convey our unbridled joy and pride once more and restate our loyalties to the Chief of Army Staff and the President and Commander-in-Chief of the Armed Forces”.