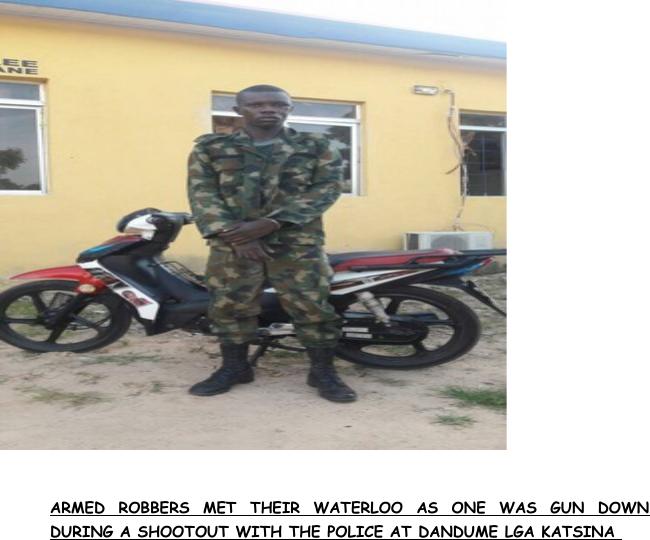 The Police in Katsina State said its operative in the early hours of Friday, at about 2am engaged an 8-man armed robbery gang in a gun duel when they emerged from the Dajin Mari Forest.

The armed robbers had invaded village of Tumburkai, in Dandume, shooting sporadically trying to get access to the house of one Alhaji Sufiyanu.

However, they were repelled by a team of mobile policemen deployed in the area which engaged the hoodlums on a gun duel.

As a result of the shootout one of the armed robbers was gunned down by the gallant police patrol team.

The Katsina state Police Command also said that its officers at about 3pm succeeded in arresting a fake soldier, one Bashir Raba Mohammed of Rijiya Lemu Qrts. Kano state.

The suspect went in full Army camouflage uniform to Central Police Station Daura with a Motorcycle Lifan and met the Divisional Police Officer with a request for a police report in respect of lost particulars of his Lifan motorcycle.

The DPO became suspicious and made some background checks on the suspect.

However, investigation revealed that, Bashir Raba Mohammed was actually not a military personnel but an imposter impersonating the Nigerian Military.

Additionally, the suspect confessed to have been operating drug/Indian hemp syndicate, transporting same from Kano to Daura on his motorbike using the uniform as a shield.

Suspect has been apprehended and investigation is ongoing into the matter.