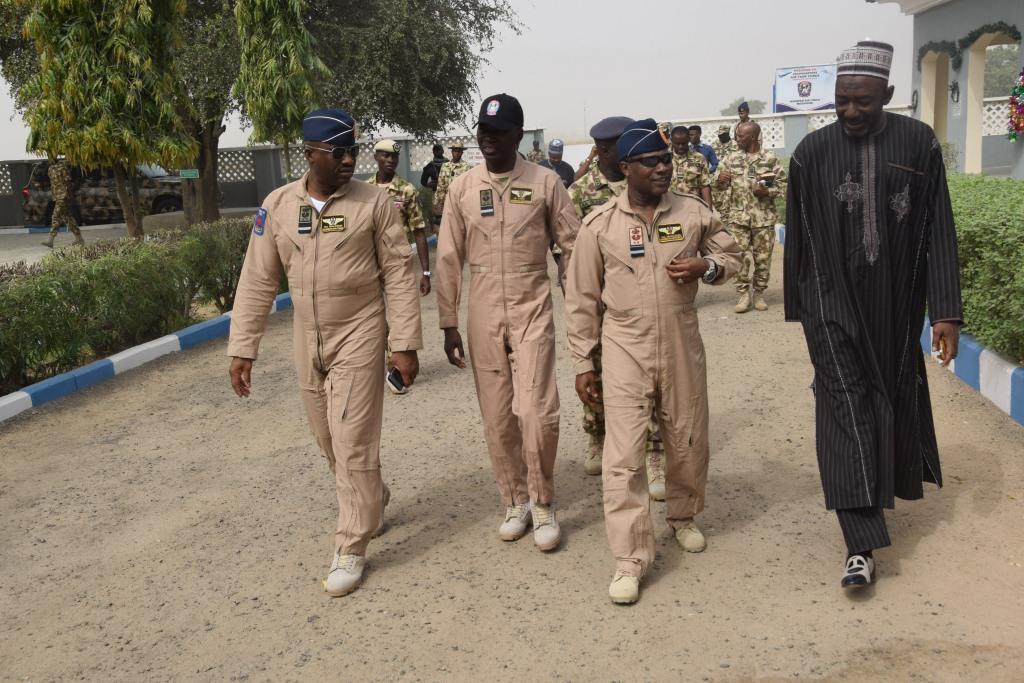 A team of very senior officers from Headquarters Nigerian Air Force (NAF) celebrated this year’s Christmas with the officers and airmen/airwomen of the Air Task Force, Operation Lafiya Dole in Maiduguri.

The team of senior NAF officers was led by the Chief of Policy and Plans at HQ NAF, Air Vice Marshal (AVM) Muhammadu Mohammed, who represented the Chief of the Air Staff (CAS), Air Marshal Sadique Abubakar.

Speaking during the celebrations, the CAS said “we have come to celebrate this year’s Christmas with our officers and men who are making the Air Force proud in the on-going fight against insurgency”.

The Air Force Chief urged the personnel to continue to work together with themselves and personnel of sister Services towards speedily bringing the insurgency to a complete end.

Furthermore, Air Marshal Abubakar said that for the senior officers from HQ NAF to have left their families back home to spend time with the NAF frontline troops showed that the Service recognizes and appreciates their daily sacrifices towards restoring total peace to the nation.

The CAS assured the personnel of the commitment of the Federal Government to their welfare and those of their families.

He announced that the welfare package for them included refashioned post-Service housing schemes, particularly for those serving in the Northeast.

He also reminded them that the same scheme had been introduced for the Non-Commissioned Officers and therefore encouraged them to make good use of the new opportunity.

He, therefore, urged the personnel to be steadfast, focused and unyielding in the discharge of their duties.

In a related development, the NAF also airlifted the Theatre Commander and some senior officers from the Army Headquarters (AHQ) to GWOZA to celebrate Christmas with the ground troops.

Similarly, another NAF helicopter was used to airlift the Chief of Training and Operations at the Army Headquarters, Major General DD Ahmadu and the Maritime Component Commander of Operation Lafiya Dole, Commodore Hassan Aminu to Buni-Yadi to celebrate with the troops.

Earlier in his speech, the Air Task Force Commander, AVM Idi Lubo, thanked the CAS for boosting the morale of the officers and other personnel serving in the frontline by assigning very senior officers to celebrate with them.

He reassured the CAS of their resolve to fight the insurgency in the Northeast with vigour until total normalcy is restored.

It would be recalled that Air Marshal Abubakar has made it a tradition for himself and other senior military officers from HQ NAF to always celebrate festive periods with frontline personnel, in appreciation of their selfless service and commitment to completely ridding the nation of the Boko Haram menace.