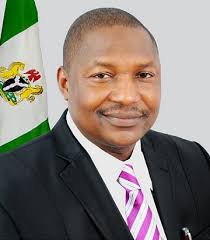 The Senate has asked the Attorney General of the Federation (AGF), Mr. Abubakar Malami, SAN, to explain to Nigerians why he has been running around the courts seeking to stop the probe by the two chambers of the National Assembly into how Mr. Abdulrashid Maina, an Assistant Director in the Ministry of Interior, was surreptitiously reinstated into the service after being dismissed.

In a statement by Senator Aliyu Sabi Abdullahi, Chairman of the Senate Committee on Media and Public Affairs, the Senate said it was surprised that the AGF who had utilized the ample opportunity given to him by both chambers of the National Assembly to state his case on the Maina issue is now the one going to court to stop the legislature’s investigation.

“We are wondering what the AGF is afraid of. When he appeared before our committee, he was well received and fairly treated.

“He indeed expressed his happiness with the protection given to him by the committee handling the Maina case.

“Why then is it very important and urgent for him to stop the investigative hearing? What is the AGF trying to hide?

“Let it be known that the legislature has the power of investigation on all institutions, bodies and individuals, particularly those who access funds that have been appropriated by us.

“We however expressed our commendation to the judiciary for upholding the principles of separation of powers and insisting on fair hearing.

“We believe that is the reason why the judge refused to grant the prayers of the AGF yesterday and rather insisted that the National Assembly should be put on notice and served all the court processes so that we could enter our own defence.

“While we respect the position of the court and would respond accordingly, the Senate has further directed the committee investigating the Maina issue to expedite action and submit their reports on time.

The Senate believes Nigerians are interested in knowing the how, who, why and where of what is now known as the ‘Maina Gate’.

We definitely will not allow those who want the facts buried to prevail”, Abdullahi stated.