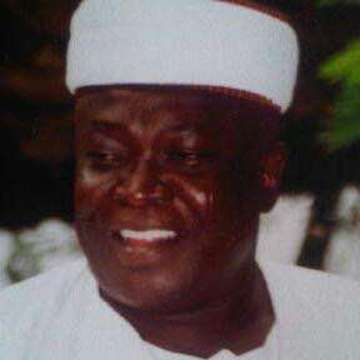 The former military governor of Kastina state and Commander Brigade of Guards who died on Monday in Abuja after a brief illness.

He described the death of the military strategist, who was widely known as “Jungle Expert”  as a colossal loss at a critical time when the country requires his professional and his wealth of military experience to quell armed insurgency and kidnapping ravaging many states of the country.

The Governor in a statement signed by his Chief Press Secretary, Malam Jibrin Baba Ndace said Late Col. Madaki left footmarks in virtually every areas of our national life where he was opportuned to serve.

A military officer with unrivalled passion for fairness, respect for constituted authority, development and peace, Late Colonel Madaki’s heroic role and contributions to the development of the state and the country rated him far ahead his contemporaries.

Governor Sani Bello who described the Late Colonel as a peace maker and  a philanthropist said his contributions to the development of the state and the country would be greatly missed.

“Nigeria has again lost one of her finest military officers. A professional per-excellence whose developmental contributions cut across many stratas of our national life. We have lost an elder state man, a leader full of knowledge and wisdom. We will miss his wise counsels on peace, leadership and national development.

“Late Colonel John Madaki left at the time we needed him most in the state, especially on issues of growth and development of the state and the country as a whole. We will indeed miss him.”

The “Jungle Expert” was appointed military governor in December 1989 by the former military President, General Ibrahim Badamasi Babangida. He returned to the barracks in 1992 as commander Brigrade of Guards and retired from service as Commandant, Nigerian Army Depot, Zaria, Kaduna State.

Until his death, Madaki was the Chairman of the 7 man advisory committee constituted by Governor Sani Bello to offer innovative advise and dynamic perspectives on how to improve the economy, infrastructure and security of the state.

Gov. Sani Bello then prayed that God grant the family, the military and the nation the fortitude to bear his demise.

He was survived by his wife and 5 children.