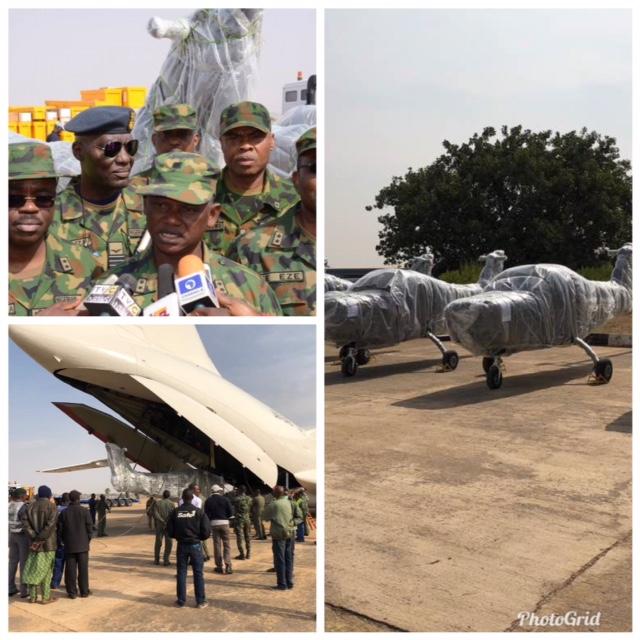 The Nigerian Air Force (NAF) on Sunday took delivery of the final batch of Super Mushshak trainer aircraft that the Federal Government had since ordered from Pakistan.

According to a statement signed by Air Vice Marshal Olatokunbo Adesanya, Director, NAF Public Relations, “The Ilyushin 76 Strategic Airlifter aircraft that brought the new Super Mushshak aircraft touched down at NAF Base Kaduna at exactly 7.45 am on Sunday.

“The Chief of Logistics at NAF Headquarters, Air Vice Marshal Bello Garba, received the new aircraft on behalf of the Chief of the Air Staff, Air Marshal Sadique Abubakar.

The further said, “A combined team of NAF and Pakistan Air Force (PAF) personnel were also on hand to assist in offloading the new aircraft, some parts of which came in crates.

“In addition, officials of the National Customs Service and the National Immigration Service were present to ensure necessary documentation.

“The newly delivered aircraft, which are capable of being used for acrobatics training, are all brand new and fitted with digital glass cockpit.

“The newly received aircraft, five in number, form the final batch of a total of 10 Super Mushshak aircraft, the procurement of which the current Federal Government Administration initiated in Year 2016.

It explained that “As at 2015, local primary flying training in the NAF was almost grounded thereby necessitating the procurement of the Super Mushshak Aircraft.

“Without doubts, the delivery of the aircraft would go a long way in helping to sustain the process of building capacity to effectively prosecute the counterinsurgency operations in the North East as well as other forms of criminalities in the country”, it added.

“It could be recalled that the NAF took delivery of the first batch of 5 brand new Super Mushshak Aircraft on 14 July 2017, following which the aircraft were inducted and deployed for primary training of NAF pilots.

“Some NAF personnel had undergone training in Pakistan, as Instructor Pilots and technicians on the Super Mushshak aircraft, as part of the contract.

“The delivery went without any hitches and the Ilyushin 76 Aircraft has departed from Nigeria.

“The newly received aircraft will now be assembled in Nigeria by a team of PAF and NAF technicians prior to test flying and formal induction into the NAF.”