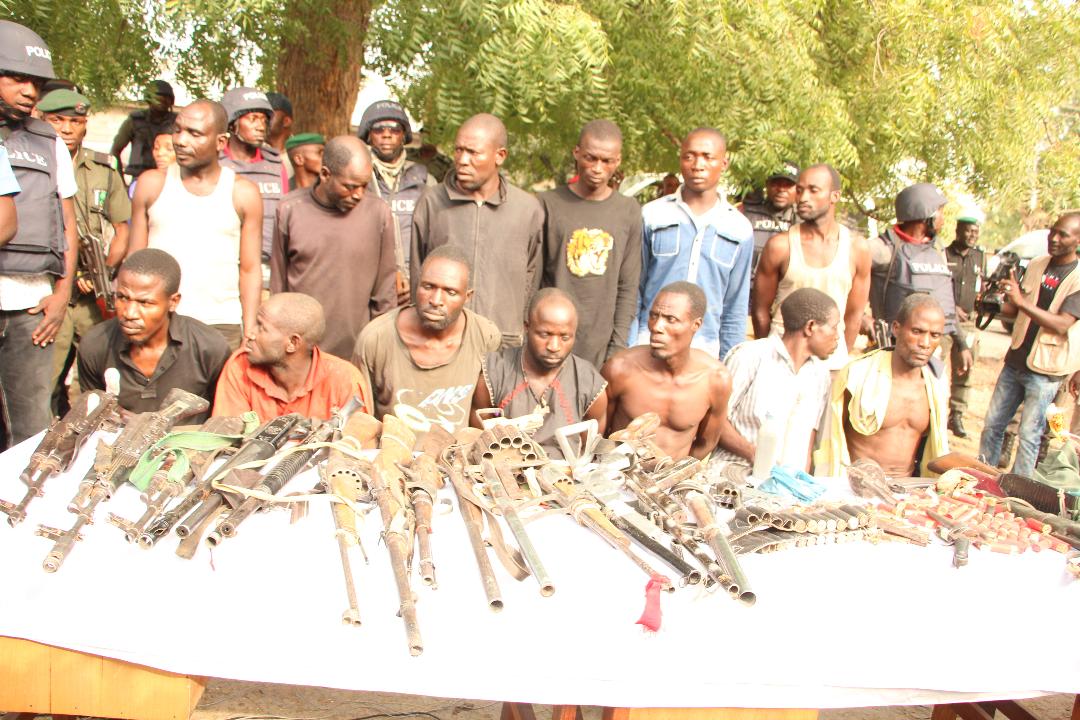 Following a directive by the Inspector General of Police to the Special Tactical Squad of Police operatives attached to Operation Absolute Security, 13 vicious kidnappers, armed robbers and militia gang who slaughtered over 19 Nigerians and two Police Officers have been arrested in Niger State.

A statement from Force Headquarters said, “The Inspector General of Police, IGP Ibrahim Idris, concerned with the loss of innocent lives in the towns, villages and communities along the Minna-Bida-Birnin Gwari-Funtua and Tegina-Kaduna highways, deployed personnel of the Special Tactical Squad attached to Operation Absolute Sanity and personnel of Niger State Police Command under the supervision of the Commissioner of Police, Niger State to restore law and order in the communities mentioned and arrest the perpetrators.

“Consequent on this directive, the joint team moved in and raided all the identified criminal camps, kidnappers’ dens and hideouts in the Forest in Birnin-Gwari, Tegina, Alawa and Kabata town in Niger State.

“The operations which lasted several days and intense exchange of fire between the Police Joint Team and this vicious militia/kidnap for ransom gang resulted in the arrest of Thirteen (13) suspects and recovery of the cache of prohibited arms and ammunition listed above.

The statement by the Force Public Relations Officer, CSP Jimoh Moshood said, “The gang confessed to have been responsible for the kidnap and slaughtering of seven (7) persons from a mosque at Kabata town under Rafin LGA of Niger State late last year.

“They also admitted to be responsible for the attack on a Police Post at Alawa town in Shiroro LGA of Niger State where the Police Post was burnt down and two Policemen who were in a team on a rescue mission of some kidnapped victims were ambushed and killed by this Militia gang.

“The Gang leader, Lawal Maisaje a.k.a Lawal Kwali and his second in command Zakairu Mamman during interrogation confessed that they have slaughtered more than Nineteen (19) innocent people in the mentioned villages which include a father and his son after collection of ransom from most of the victims ranging from N1million to N3million.

“Investigation is being intensified to arrest other gang members still at large. The suspects will be arraigned in court on completion of investigation.

“The Force will not relent in its renewed effort to rid the country of all forms of crimes and criminality and ensure adequate protection, security and safety of lives and properties of all Nigerians throughout the country.

“The Nigeria Police Force deeply appreciates the support and cooperation of members of the Public for the timely information in achieving these success stories.

“The Gang confessed and admitted to have been Terrorizing Travelers and responsible for several attacks and killings in villages and communities along the Minna-Bida-Birnin Gwari-Funtua and Tegina-Kaduna highways and also responsible for attack on Alawa Police Post, Shiroro local government area where two (2) Policemen were killed late last year.

The suspects are as follows

Others are  Musa Akawu,  Suleman Bawa and  Ismail Yususf.

The Police recovered a cache of arms and other exhibits including 3 AK47 Rifles, 2 English pump action with breach, 10 locally made single barrel guns, 1 colt USA made pistol with breach no 574912013, 1 revolver pistol.