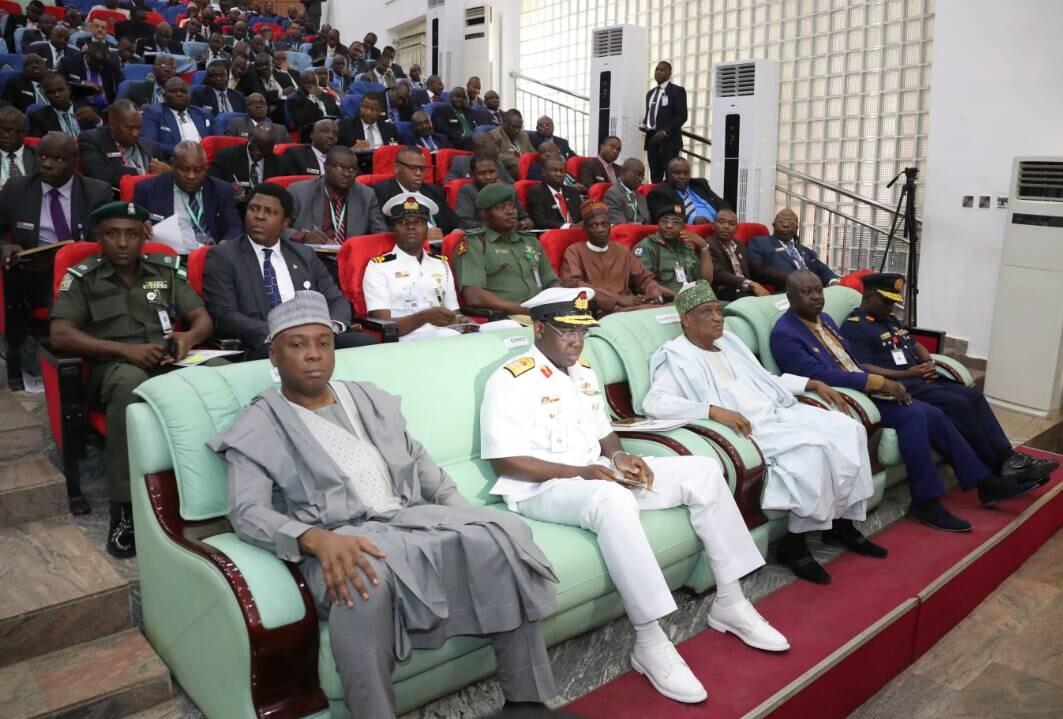 President of the Senate,  Dr. Abubakar Bukola Saraki, on Tuesday, said that full adherence to the principle of Separation of Powers was crucial to the survival of the democracy, good governance and enhanced national security.

Saraki stated this in his lecture entitled: ‘Separation of Powers and National Security in Nigeria: An Appraisal’, presented to Course 26 Participants of the National Defence College (NDC) in Abuja, according to a statement by his Chief Press Secretary, Sanni Onogu.

He stated that a situation where people frown at the actions of the legislature taken in the course of carrying out its constitutional duties negates the Principle of Separation of Powers and the Rule of Law.

He noted that each arm of government is intended and designed to be free of coercive influence from another, “But, regrettably, that is not always the case, in practice, in the Nigerian experiment,” Saraki said.

He added: “Section 60 of the 1999 Constitution provides that: ‘Subject to the provisions of this Constitution, the Senate and the House of Representatives shall have the power to regulate its own procedure, including the procedure for summoning and recess of the House

“We, in the Legislature, as representatives of the people, strive to carry out our oversight functions in line with the doctrine of Separation of Powers – because it is our duty as stipulated by the Constitution.

“We also do so to guard against Lockean ‘human frailty’ – by which I mean the tendency towards abuse of power, where such power is absolute. To one’s chagrin, however, our actions are often misconstrued, because few understand that the Legislative arm of government is not a rubber-stamp, driven from pillar to post by the whims and caprices of another organ of government.

“Let all listening to me today note the unassailable position, which is this: the Executive, the Judiciary and the Legislature are co-equals; none is subordinate to the other. Indeed, as former Senate President Ken Nnamani once opined, ‘The Legislature and the Executive are co-managers of the economy.'”

According to the President of the Senate, the press is replete with stories of ‘face-offs’ between the Legislature and Executive, real or imagined.

These,  he said, include unguarded pronouncements by a former Secretary to the Government of the Federation (SGF) – and other government officials – concerning the Senate; or the refusal of the heads of some government agencies to answer when summoned by the legislature.

Saraki said: “The refusal of the Senate to confirm certain nominees of Mr. President has drawn undeserved ire in many quarters. These are people who misconstrue the role of the legislative arm, because we are perfectly within our bounds under the Nigerian constitution.

“In any case, if the Senate confirms two nominees and rejects one –should we be seen as attacking the Executive? Or, should we not ask whether there are weighty questions to answer on the part of the nominee? Why is the Legislature vilified when occasionally, a nominee fails to scale through?

“We really should ask ourselves the tough questions, rather than parroting the fallacy about the Legislature not playing along with the Executive. Ask yourself what kind of democracy we would have if all powers resided solely in one arm of government.

“That is why I sometimes marvel at the hypocrisy of some vociferous voices who claim that they are fighting for democracy and yet they keep quiet when one arm of government repeatedly imposes its will on the judgment of a co-equal arm of government.

“Democracy and the Rule of Law depend on four elements – deliberation, engagement, participation and collaboration. The constitution says that if you want to wage war or call out troops you must go to the National Assembly and you don’t – is that in tandem with Separation of Powers?

“Even in the United States that we modeled our system on, the White House must engage with Congress in the formulation of critical policies on security and defence.

“If the constitution prescribes who may be appointed into certain positions and you flout that – should the Legislature not take a stand in the public interest? Or the fact that one judge is believed to be corrupt – does that justify one arm of government breaking down the doors of members of an independent Judiciary?

“American judges have blocked many Executive Orders made by President Donald Trump, including those on the Muslim Travel Ban, Immigration and Sanctuary Cities. Despite Mr. Trump’s frenetic twitter activity voicing his displeasure, the judges’ rulings stand – because the Judiciary is free from the coercive influence of the Executive.

“The travails of the Nigerian Legislature have unfolded under the cloud of many challenges confronting the nation. These only serve to destabilize government, and cannot be good for national security.

“In a country that is an amalgam of some 250 ethnic nationalities under one flag, unhealthy rivalries are a symptom of systemic distress, for the avoidance of which Separation of Powers was propounded,” he said.

He further said that “A successful regime of Separation of Powers would require much more than enacting more laws and amending existing ones. It would require the active compliance with the doctrine from all arms of government.

“As the Legislature, we would require the Executive to give due regard to legal decisions, invitations and resolutions of the National Assembly. Let me quickly add that we will hold ourselves to the same rules vis-a-vis our co-equals.

“Going forward, we have set up a Committee headed by the Vice President to look into ways of improving the relationship between the Legislature and the Executive; and indeed, it is increasingly apparent that relations have improved greatly, although there is still much to be done.

“The joint presentation of the Budget to both Houses, now done for two years in a row, is evidence of cordiality between the two arms of government. This is the way forward.

“After all, when there is a cold war between two arms of government, who loses out? The country loses out– in terms of stability, governance, development, peace and security. We must also always keep in mind the fact that the ultimate Check and Balance is exercised by one party – the people – at the ballot box,” he said.

He stated that there was the need  to create greater awareness about the inherent principles separating the three arms of government, “such that, when the National Assembly next beams the searchlight on the use of funds appropriated for fighting the insurgency – or funds intended to provide succour to internally displaced citizens- some will not look at us askance – and those who would arrogate absolute power to themselves, will not go up in arms against the Senate.

“It is a balancing act, as implied by Checks and Balances, and we will continue to do our best to fulfill our role according to the Constitution. Despite the clarity and gravity of the Constitution on the independence of the Legislature, the Deputy Senate President and I have been subject to prosecution over the internal affairs of the Senate.

“The way we are elected and our processes – we are independent. It was therefore foolhardy of government to mount such prosecution.

“The courts have ruled multiple times that the National Assembly’s internal affairs are inviolable – and yet, what we saw was a ready willingness to cross the line and mount a case, in a flagrant overreach of executive power.  Let me say that I view this as a distraction and a legal affront to the principles of Separation of Powers.

“From the outset, on my assumption to the position of Nigeria’s President of the Senate, I have had to endure court cases even at these pressing times in our national life, when all our energies should be geared towards development.

“Through all this, I have respected the constitutional mandate of the Judiciary and appeared in court on several occasions, trusting that I would be vindicated, because I believe in the Rule of Law. These are some of the sacrifices we make, and what we go through, so that these institutions can be strong. It is not about individuals but about institutions of government, so as to strengthen democracy.

“The way forward, having recognized the necessary value that Separation of Power brings to the strengthening of our democracy, it is important then that we chart a course that ensures that the inviolability of our institutions becomes a mandate for the protection of our democracy.

“The key purpose here is not the protection of the individuals who occupy these offices temporarily but rather, the protection of our democratic norms. So, for everyone here today, there is really a choice to be made. We have to decide whether or not we really want democracy.

“We cannot have it both ways. I always say that, today, we have an honest and transparent President – but it is no reason not to defend the principles of Separation of Powers – for who is to say what the next occupier of that office will be like?

“We fight today with an eye on posterity, in order that the future may be more assured. Therefore, I charge you all to go and learn as much as you can about the doctrine of Separation of Powers and its implications for leadership, governance, democracy and national security.

“If we decide that we do not want a National Assembly that will hold the Executive to account, that is another matter entirely. We can always go back to the Parliamentary system we operated immediately after independence.

“But as long as we run the current system of government, it is not even a matter of debate. We must uphold the core principles of Separation of Powers because our development, peace and security depend on it,” he stated

Meanwhile, the national summit on security being organized by the Senate has been postponed in honour of the late former Vice President, Alex Ekwueme who will be buried on Saturday.

The summit, scheduled to hold on February 1 and 5 at the Banquet Hall of the State House was to be declared open by President Muhammadu Buhari.

A statement by the chairman of the Chairman, Senate ad-hoc committee on review of security infrastructure who is also the Majority Leader, Sen. Ahmed Lawan, stated that the postponement was to honour the late former Vice President, and to also enable Federal legislators, particularly those from the South-East, participate fully in the burial programme of the late elder statement.

Lawan said a new date for the summit would be announced in due course, and extend the committee’s apology to the invited dignitaries.

The summit was organized to provide an all-inclusive platform for heads of security and defence agencies, Governors, traditional rulers, socio-cultural groups, civil society organizations and others, with a view to finding solutions to acute and long term security challenges in the country.

Though the now postponed summit was an initiative of the Senate as part of its contribution to the resolution of the rising security challenges, it is being convened in partnership with the Presidency to find a common solution to the issue.