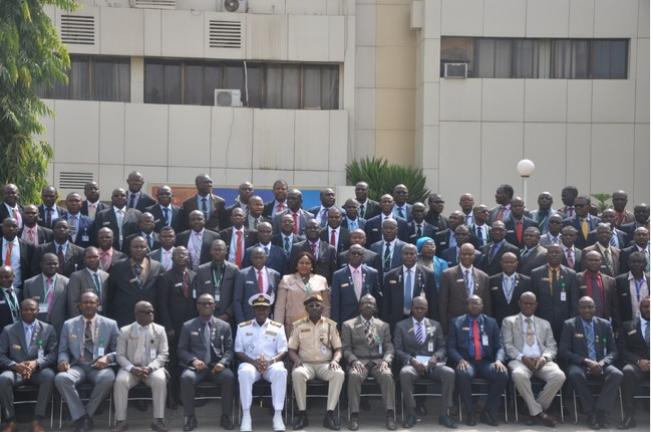 He made this remarks while delivering a lecture entitled “Challenges of Modern Migration Management: The role of Nigeria Immigration Service” at the National Defence College (NDC) Nigeria to course 26 participants.

He emphasized that receiving countries of irregular migrants would experience criminality and threat to societal culture.

The CG also explained the influx of irregular migrants to Libya was as a result of lack of central authority in Libya, where warlords use migrants as an alternative deal in place of oil.

The CG however reiterated, that countries that have consistent irregular migration should provide an enabling environment in terms of good governance, education, job opportunities, basic social amenities amongst others to citizenry.

He also explained that migration itself is moving from one abode to another with the intention to settle, but should be done following the conventional processes of migration.

The CG further explained that migration management is a concept that was developed to help countries maximize the benefits of migration while minimizing the inherent risks.

He buttressed the concept saying that the result was to create a “triple win” for the originating country, the country of destination and the individual migrants.

Additionally, Babandede said the Nigeria Immigration Service is saddled with the responsibility of the management of migration in the country.

He said the Immigration Service under his leadership has continued to ensure that no irregular migrant is allowed to remain in the country a day longer than necessary.

He however maintained that the service would sustain border control in collaboration with security agencies.

Relatively, he asserted that the United Nations estimated that, by December 2017, there were 258 million people living in a country other than their country of birth, which was an increase of 49% since the year 2000.

He also analyzed that recipient country of migrants in the developed economies faces perceived political, economic and social problems as a result of migrants.

The Commandant NDC, Rear Admiral Adeniyi Osinowo thanked the CG for making time amidst his tight official engagements to deliver the all-important lecture to the participants.

He disclosed that the lecture would further broaden the horizon of the participants on the challenges of modern migration management and the role of the Nigeria Immigration Service.