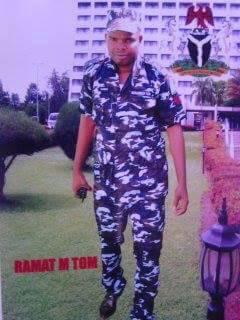 The Nigerian Police at Force Headquarters has announced the death of Sergeant Tom Mohammed, Force Number 344862 who killed during a shootout by IRT operatives with dare-devil kidnappers along Toto LGA in Nasarawa State on Thursday February 1, 2018.

According to a statement from the Police, late Sergeant Tom Mohammed died in the line of duty at about 7.30am when IRT Operatives who were in Nassarawa Toto LGA of Nassarawa State on investigation in a Kidnapping case, ran into an ambush by suspected Fulani Kidnappers.

“The IRT operatives engaged the kidnappers in a shootout and Succeeded in foiling the kidnap and repelling the attackers.

However, after the incident F/No. 344862 Sgt Tom Mohammed was discovered to be missing in action.

Hence combined team of IRT and Federal SARS Nasarawa and Divisional Patrol Nassarawa team from the state combed the entire forest and eventually on Friday February 2, 2018 at about 9am, they found his bullets ridden body in the same forest.

The Foreigner and his MOPOL Escort also Sustained minor injuries and they were treated and discharged while one of the kidnappers was arrested alive with bullet wounds.

The Police added that serious efforts are in progress towards the arrest of the remaining gang members responsible for the attack and killing of ‘Our Sergeant’.