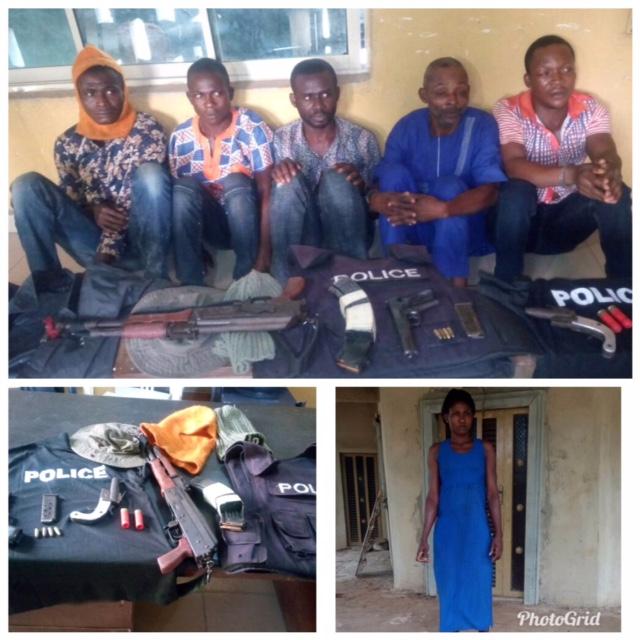 The Police IRT Squad said on Friday that its operatives have arrested 5 members of a kindnap for ransom gang who abducted the Unit Commander of MOPOL 55, Aba, Abia State, ASP Solomon Aniefiok and collected ransom for his release.

During the operation to arrest the kidnappers, one of the kidnappers was killed in a shootout while a sister of the gang leader, one Osioma Paul who is the arms and ammunition keeper for the gang was arrested.

The Police said, “On the 14th of January 2018, ASP Solomon Aniefiok Unit Commander 55 PMF went on visiting round to check his men in the field and he was Suddenly blocked and Kidnapped by AK47 Rifle carrying Kidnappers.

“He was eventually released 3 days later after ransom was paid.

“Irked by the development, IGP Ibrahim Idris deployed the Intelligence response team IRT to Abia state to get the Kidnappers to justice.

“Based on the IGP directives one of the best IRT teams was deployed and after 6 days of unrelenting follow up 5 of the Kidnappers were arrested alive and 1 Kidnapper met his Waterloo during Gun battle with IRT Operatives.

“Exhibits recovered from the gang include one AK47 Rifle with S/no 56-2550382 with 2 Magazines and 60 live Ammunitions, and One Berretta Service Pistol of the Mopol Unit Commander, One local made Pistol and 2 Cartridges.

“He is a Dismissed Recruit as he was dismissed during Police training in 2006. He confessed to three (3) Kidnap operations in Abia State.

“Others are John Alozie aka Alagboso 26yrs. Native of Osisioma, Abia State. He confessed to the Unit Commander’s kidnap and 2 other Kidnappings.

“Eze Orji 58yrs and Native of Isiala Ngwa, Abia State and also one Osioma Paul, wife to a Kidnapper now in Prison and Sister in-law to the arrested gang leader.

“Osioma Paul was equally arrested for keeping the operational rifles and ammunition for the Kidnappers in her House.

The Police said serious efforts to arrest the few remaining Gang-members are in progress.