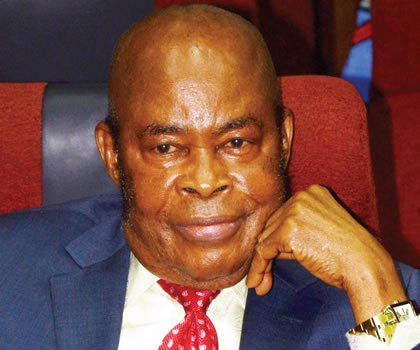 The Tribunal Chairman, Mr. Danladi Yakubu Umar threatened to strike out the 10-count charge brought against the apex court Justice by the Federal Government should government lawyer refuse to proceed with the trial on February 20, 2018

Although the trial was slated for today, the anger of the tribunal was provoked when a lawyer Julius Kolawole announced his appearance for the Federal government and demanded for an adjournment of the trial.

Kolawole told the tribunal headed that the Attorney General of the Federation (AGF) had engaged a Senior Advocate of Nigeria SAN by name Abeni Mohammed to take over the trial which started since last year without any headway and that the new lawyer needed time to formally takeover the case.

At this point, the Tribunal Chairman, Danladi Umar cut in and demanded the whereabouts of the newly engaged Government lawyer and was told that the senior lawyer was not present in court.

The Tribunal Chairman who was furious with the explanation reminded government legal team that the matter was for definite trial, having suffered series of adjournments from the same government that brought the criminal charge against the Supreme Court justice.

Umar told the Federal Government legal team that his tribunal is a serious court for serious complainant and that any attempt to further scuttles the definite trial would be resisted and that the charge may be struck out.

The tribunal chairman however, granted the adjournment requested and shifted the matter for definite trial on February 20th with a warning that the charge maybe terminated that day should the Federal Government come up with any excuses to further abort the definite trial of the Supreme Court justice.

Danladi said, “The next adjourned that of February 20, 2018 is for definite, definite, definite trial and we will not tolerate any further request for an adjournment. This is a serious court of justice that must be respected.

Another member of the tribunal, Mr. Williams Atedze lambasted the Federal Government for take the tribunal for a ride laxity in the prosecution of the high profile case “one of the salient points in our law profession is that lawyers are supposed to be men of honors.

Contrary appears to be the case in this instant matter.

This matter has been consistently adjourned at the instant of the Federal Government for not just cause and this is not good in any criminal trial.”

The Federal Government had last year slammed A-  10 court charge against Justice Ngwuta  boarding on false declaration of asset and money laundering .although the apex court justice pleaded not guilty to the charge, the Federal Government had not be able to open its case against the judge since last year  but instead had changed its lawyers several times to stall the trial.

At Wednesday proceedings, Mr. Kanu Agabi SAN stood for the defendant and was supported by another Senior Advocate of Nigeria SAN Mr. Paul Erokoro.