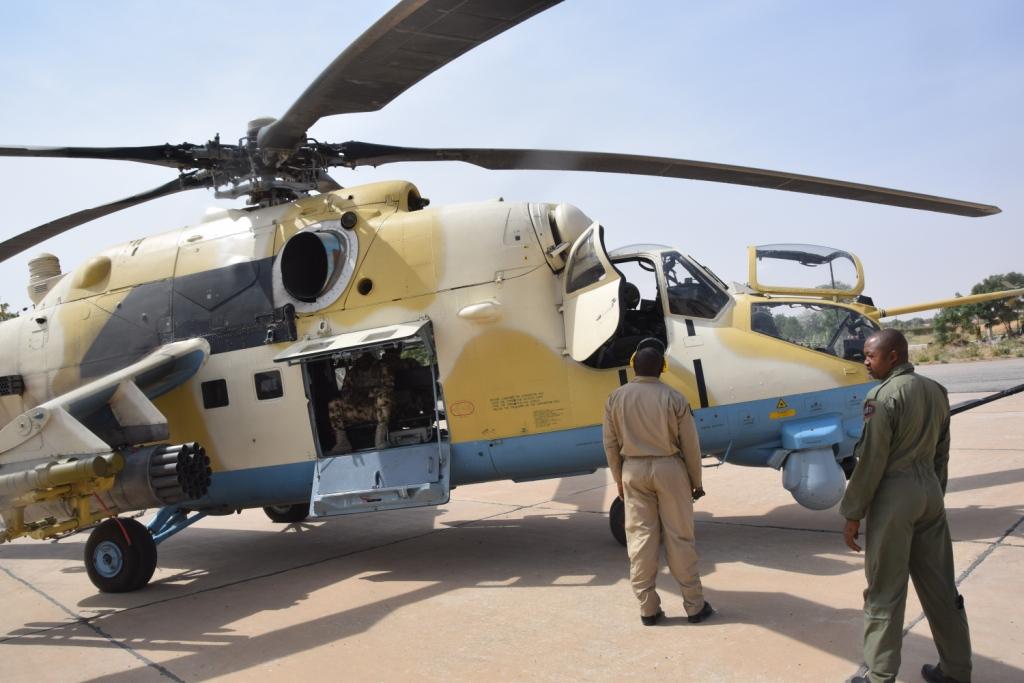 The Nigerian Air Force said on Wednesday that the Chief of the Air Staff (CAS), Air Marshal Sadique Abubakar, has temporarily relocated to the Nigerian Air Force (NAF) Base at Maiduguri, from where the air search operations for the missing Dapchi girls are being coordinated.
It said the temporary relocation is in order to have first hand information on the progress of the air search efforts and also give additional directives as might be necessary.
Director of NAF Public Relations, Air Vice Marshal Olatokunbo Adesanya in the statement said, “ The National Security Adviser (NSA), Mohammed Monguno was equally at the NAF Base Maiduguri, where he spoke to and encouraged the NAF personnel involved in the day and night air search operations. He said media reports earlier quoting the National Security Adviser saying that 100 hundred aircraft have been deployed for the search, misconstrued the number of sorties flown by the NAF for the number of aircraft.
His words, “The attention of the Nigerian Air Force (NAF) has been drawn to a statement being circulated to the effect that 100 NAF aircraft had been deployed in search of the missing Dapchi girls.
“While paying a courtesy call on the Executive Governor of Yobe State, in company of the Chief of the Air Staff, on 27 February 2018, the National Security Adviser, Mohammed Monguno, indeed spoke about the number of sorties so far conducted by NAF aircraft in the course of searching for the missing girls within a stated period.
“Obviously, the number of sorties does not equate the number of aircraft deployed”. Adesanya said both the NSA and the CAS visited Damaturu, where they paid a courtesy call on His Excellency, Governor Ibrahim Gaidam of Yobe State, during which they held useful discussions regarding the missing girls.
“Later in the day, the NSA, accompanied by the CAS and other top military officers, travelled to Monguno to commission new projects at 171 NAF Detachment Monguno.
“The newly commissioned projects include the Unit’s Headquarters Complex, a block of 4 Single Officers’ Quarters, a block of 10 flats for airmen/airwomen and 2 helipads, all of which have just been constructed.
Commander of the Air Task Force, Air Vice Marshal Idi Lubo while speaking at the commissioning said air power projection has limitations, one of which is reach.
He therefore expressed his delight, noting that with the commissioning of the projects at 171 NAF Detachment Monguno, the NAF had just extended the reach of its helicopters.
In his remarks, the CAS stated that the projects were undertaken in pursuit of the NAF’s commitment to ensuring security in the Northeast.
He added that the NAF would continue to deploy air assets in all parts of the country towards ensuring that Nigerians are able to prosecute their businesses in a safe and secured environment.
On the missing Dapchi girls, Air Marshal Abubakar declared that no efforts would be spared by the NAF in locating the girls, in conjunction with other security forces.
He disclosed that NAF pilots on different NAF platforms were operating day and night to locate the girls, adding that he had decided to temporarily relocate to Maiduguri, given the import of the unfortunate incident. While commissioning the projects, Gen. Monguno, lauded the monumental achievements of the NAF under its current leadership.
He recalled that 171 NAF Detachment Monguno was only established in 2017; he was therefore surprised to see all that had been accomplished within the short period.
He described the feats as a testimony to the zeal and commitment of the CAS to repositioning the NAF into a highly professional force in line with his clearly stated vision.
The NSA also described the establishment of NAF presence in Monguno as being long overdue, as it would add the much needed value to the efforts of the other security agencies in ensuring peace in the Northeast.
Speaking further, the NSA commended the NAF for its immense contributions to the overall efforts at degrading the capability of the Boko Haram Terrorists (BHTs) while urging NAF personnel to remain steadfast.
He seized the opportunity to appreciate President Buhari for his support to the Armed Forces of Nigeria in ensuring the sustenance of operations. Also commissioned yesterday, by the NSA, were a newly constructed Fire Fighting and an Aircraft Arming Bay at NAF Base Maiduguri.
It is recalled that the Dapchi girls were declared missing on 19 February 2018 after reported attacks by BHTs following which the NAF immediately commenced an air search for them.
The NAF has had to deploy additional air assets, including Intelligence, Surveillance and Reconnaissance (ISR) platforms, to the Northeast, on 25 February 208, in a renewed effort at locating the missing girls.
Olatokunbo Adesanya AVM, Director of Public Relations and Information, NAF.