No respite for Boko Haram/ISWAP terrorists as the Nigerian Armed Forces has sustained a high tempo of its clearance operation with the recent destruction of Boko Haram’s ‘tactical command centre’ and killing scores of fighters in YUwe, Borno State.

In a statement released Friday morning by the Coordinator of Defence Media Operation, Maj Gen John Enenche, the operation was carried out by the Air Task Force (ATF) of Operation LAFIYA DOLE and was undertaken under the subsidiary Operation LONG REACH to unhinge the leadership of Boko Haram terrorists in the north east. The successful operation which was undertaken after series of Intelligence Surveillance and Reconnaissance (ISR) succeeded in destroying the terrorists’ tactical command centre and killing of some of their fighters at Yuwe in the Sambisa Forest of Borno State. 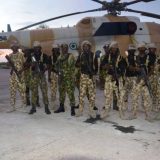 The Operation which was executed on June 17, 2020 after “series of Intelligence, Surveillance and Reconnaissance (ISR) missions observed significant presence of Boko Haram fighters in the settlement and also established that a prominent compound with solar panel-mounted rooftop and a large tree in the middle with a nearby flag-mounted sentry post was being used by the BHTs to coordinate their operations in the area.

“The Nigerian Air Force (NAF) fighter jets dispatched by the ATF to take out the Command Centre took turns in attacking the location scoring accurate hits, leading to the destruction of the Centre and surrounding structures as well as the neutralization of several fighters”, the statement added.

The Nigeria military has in the past few weeks been mounting much deadly pressure on the Boko Haram/ISWAP terrorists with series of bombardments from both ground and air resulting to death of many terrorist elements including some of their commanders. 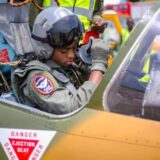 The Chief of the Air Staff, Air Marshal Sadique Abubakar, has commended the Air Task Force for their dedication and professionalism. The Defence Headquarters equally urged them to intensify the air offensive against the terrorists and all other criminal elements in the country.