Despite the reluctance of the governments in the Southeast states – Enugu, Ebonyi, Abia, Anambra and Imo, recent reports on the spread of COVID-19 in the region calls for attention.

With about 1, 035 cases, 21 deaths and 549 active patients among them, data show that the fear in the Southeast is due to the caliber of persons who have contracted the virus.

At the beginning of the pandemic, some states in the region ignored warnings from the Presidential Task Force (PTF) and citizens went about their business without respect for social distancing.

Sources in the region noted that the situation is still the same except for slight paranoia caused by the infection of notable politicians and the national spread of the virus.

In its briefing on June 20, the PTF declared that no state in Nigeria was free of COVID-19 in spite of claims by some state governments that their areas were free of the virus infection.

During a PTF briefing on COVID-19 pandemic in Abuja, the Director- General of the Nigeria Centre for Disease Control, NCDC, Dr Chikwe Ihekweazu, said there was nothing to be ashamed of about recording coronavirus cases in a state as the disease remained a global pandemic.

Ihekweazu urged states’ frustrating testing effort to desist in the interest of the general public.

“No state in Nigeria is COVID-19 free and no country in the world can confidently claim to be COVID-19 free. It is a global pandemic and we can’t separate ourselves from the world.

“It is not a shame to have positive cases in your state; denial will only make the issue more difficult. If we do not know the status of your people, you are indirectly putting the lives of your people and those of health workers at risk. The implication of that is the likely collapse of your health system.

“Rather than avoiding testing, kindly make your state available, so the country can collectively move forward. COVID-19 is here with us, we need to fight it and the best way to do that is to know the current situation of things.”

Also, the PTF Chairman and Secretary to the Government of the Federation, Boss Mustapha, urged Nigerians to make themselves available for testing to ascertain their COVID-19 status as early detection would save lives.
“I, therefore, urge Nigerians to make use of these facilities and get tested. Similarly, I implore us not to be afraid of undertaking the COVID-19 test.

“Testing positive for COVID-19 is not a death sentence, but failure to test; especially when symptoms are evident, could result in death as it may be too late once the symptoms become full-blown.

“The loss of any Nigerian is not only painful but most avoidable provided we seek help early,” he said.

On June 8, Gov Okezie Ikpeazu of Abia tested positive for coronavirus after his test of May 30 came out negative.
He had submitted another sample for test on June 4, which was confirmed positive.

On June 9, reports indicated that Ikpeazu had been moved to Abuja, Nigeria’s capital, for intensive care after he tested positive for COVID-19.

Apart from medical staff on the ground to attend to him, it was gathered that the Abia State governor came to Abuja with a retinue of aides and security personnel, some of whom are believed to have tested positive as well.

Ikpeazu was later reported to have kidney failure and is said to be undergoing dialysis, conditions which complicate chances of full recovery from COVID-19.

The governor had boasted on March 22 that the state would not record any coronavirus case because it was the only state mentioned in the Holy Bible.

He said, “Abia is the only state that is mentioned in the Bible. We have a promise from God that none of these diseases will touch God’s people. And I hold on to God’s promise.

In his current condition, Ikpeazu asked his deputy Ude Uko Chukwu, to act in his stead.

Meanwhile, on June 23, 13 members of the Imo State House of Assembly tested positive for COVID-19.

The news was confirmed by Chinedu Iwuala, the Spokesman for the Imo State Task Force on COVID-19.

He said after a member tested positive, NCDC decided to test all the 27 lawmakers in the assembly and 13 results came back positive.

Iwuala said the affected lawmakers had been advised to go on self-isolation.

The week before Collins Chiji, the Speaker, had ordered a lockdown of the assembly complex after the first positive case was reported.

In Enugu, Chijioke Ugwueze, the member representing Isi-Uzo Constituency, died from COVID-19 complications, the Chairman of the House Committee on Information and Communication, Jeff Mbah, confirmed on Saturday.

There have been several cases of patients fleeing isolation centres and hospitals, risking the chance of infecting others with the virus.

On May 28, the Abia State Government declared a man it said disappeared after testing positive for COVID-19, wanted.

The government said the man, Emmanuel Ononiwu, had refused to present himself for medical management and isolation.

He said the resident of Aba, the commercial centre of the state, escaped from a temporary holding facility in Aba prior to his movement to an isolation centre.

“All subsequent appeals made to him through his phone line fell on deaf ears as he insisted that he will not turn himself in and has gone ahead to switch off his line along with that of his spouse who is also required to come in immediately for testing,” the commissioner said.

Earlier in June, 25 patients escaped the Imo State Task Force on Prevention and Control of COVID-19.
On June 6, the government announced that four of the patients had submitted themselves to the committee for treatment.

A member of the task force, who is also the Imo State Director of the National Orientation Agency, Mr Vitus Ekeocha, made the fact known.

Ekeocha said the people were travelling from Imo to Delta, Rivers, Abia, Anambra, Lagos and other Southwest states.

He said that when their samples were tested and results returned positive for COVID-19, the people escaped.
He said the identities and contacts of the escapees had been sent to the state governments and relevant agencies of the areas they were travelling to track them. 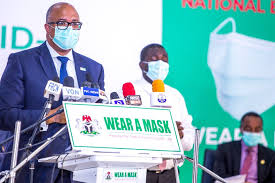 On Tuesday, June 23, 49 health workers in Enugu State were confirmed to be among 68 persons who have tested positive for the coronavirus.

The Commissioner for Health, Dr Ikechukwu Obi, made the fact known in a statement.

Obi who heads the COVID-19 Task Force in the state, said: “Following some misconceptions over the spread of the pandemic in the state, it has become necessary to correct and inform the public that Enugu has had its share of COVID-19 infections, just as it is happening all over the world.”

“No individual category has been spared by the pandemic. Consequently, men, women, children, old and young, people of every profession, and socio-economic class have been affected.

“The State Ministry of Health COVID-19 Response Team continues to follow the protocol and public health advisories of the Presidential Taskforce on COVID-19 and that of the Federal Ministry of Health, in responding to the pandemic.”

The commissioner also urged residents to remain calm while officials continue to follow guidelines put in place by the Nigeria Centre for Disease Control (NCDC).

He advised the people to seek medical help whenever they noticed disturbing symptoms and not “suffer in silence”.
“If despite your efforts… you develop symptoms or know anyone who developed symptoms, please call … and someone will speak with you and get the details,” Obi added.

“This is not the time to avoid visits to hospitals when medical attention is needed,” the commissioner said.
He said that health workers in the state would keep doing “their best in the prevailing circumstances … to deliver on their mandates, despite the huge risks faced by all”.

The NCDC confirmed 144 cases of COVID-19 in Enugu State as of Monday, June 22, with 110 on admission. Twenty-nine previously active cases have been discharged and five patients died, including a member of the state legislature.

On June 23, The Anambra State House of Assembly was forced to adjourn plenary for three weeks to allow fumigation of offices and surroundings of the assembly complex, as fear of COVID-19 heightened in the state.

The resolution for a break was reached at an executive session, and announced by Speaker of the assembly, Uche Okafor, during plenary.

Governor Willie Obiano, had in a broadcast on June 11, said Awka South Local Government Area, where the Assembly Complex was situated, had the highest number of COVID-19 cases.

Okafor said: “We want the whole of the assembly complex to be fumigated.

“We all know that cases of COVID-19 are rising in the state and most of the cases are domiciled in Awka South where we are staying.

“The leadership of the house met and agreed that all offices and surroundings of the complex should be fumigated to prevent incidences of COVID-19 in the house.

“And when we resume on July 14, we will strictly enforce the precautionary measures as stipulated in the COVID-19 Law that we passed.”

On June 19, the governor of Ebonyi State, David Umahi ordered the immediate shutdown of all judiciary buildings in the state.

He said they would remain shut till June 29 to enable health workers to fumigate the buildings and premises.
The governor gave the directive in a broadcast and directed that all staff of the judiciary in the state and their families immediately proceed for COVID-19 test.

Umahi said that the state had recorded its first COVID-19 death, which he described as regrettable and saddening.

“It is unfortunate that we have recorded one death due to this COVID-19 and it makes me so sad.

“I am directing that in line with the COVID-19 law all the courts in Ebonyi State be shut down for the next 10 days.

“Also, I advise all the Judiciary officers and their families to undergo COVID-19 tests. I have ordered that all the Judiciary buildings and premises should be immediately fumigated within the 10 days,” the governor said.

He advised traders in markets, and churches to take the COVID-19 safety protocols seriously for their own good.

On June 20, the speaker of the Enugu State House of Assembly, Edward Ubosi, also ordered the total shutdown and fumigation of the assembly complex.

In a statement in Enugu on Saturday, the Chairman of the House Committee on Information and Communication, Jeff Mbah, said the speaker gave the directive as a precautionary measure following the death of Ugwueze.

On Sunday, June 7, Abia State recorded the highest daily figure of 67 infections, more than quadruple its initial 16 confirmed cases since the first case reported in Nigeria on February 27.

Abia’s 67 cases was the highest among 260 confirmed on June 7 and the highest number of single day infection to be recorded by any of five the states in the Southeast which has remained the least affected by the pandemic.