If you sample the opinion of a thousand Nigerians on the impact of local government administration in the lives of an average citizen today, chances are that 90% of them will return a damning verdict of non-performance and at best a scant impact. The reason is not far-fetched.

The deficiencies in the constitutional  framework  and  the  reforms  that  have  shaped  the operation  of  local  government administration in Nigeria has more or less stymied its effectiveness. As a matter of fact, the legal framework does not see local governments as a third tier of government, but merely recognizes local government as an appendage of state government where the latter enjoys absolute discretion over the former.

But even in the face of this reality, some transcendental leaders are currently emerging from the grassroots who are determined to break the ‘jinx’ of lethargy and non-performance associated with local government administration in Nigeria and are set to transform it and reposition it for effectiveness. One of such emerging leaders and ‘men of vision’ is Comrade Peter Andy the Executive Chairman of Igbo Eze South Local Government Area in Enugu State.

Comprising of ten communities, Igbo Eze South is one of the most diverse and dynamic local government areas in Enugu State. In fact, the commercial town of Ibagwa Aka where the Headquarters of the local government is located is at best a mini Nigeria with large population of Hausa, Yoruba and other settlers from the across the country who live in peace and conduct their businesses without let or hindrance. Though an agrarian area with boisterous population that are renowned for producing tons of agricultural products and excellence commerce, the local government boasts of over four big markets that attract traders from far and near who come to transact business.

But Igbo Eze South is also one Local Government Council that has been buffeted by myriads of challenges ranging from inept leadership, fragile peace, and army of restive unemployed youths to broken and dilapidated infrastructures, gross lack of social amenities, inter-community distrust and disillusioned folks. It is a Council that was in dire need of direction, inspiration and more importantly, leadership, prior to the providential coming of Peter Andy.

Though not your usual politician (who is usually schooled in the art of rhetoric and deception), the former students union leader came naturally equipped with a critical component of leadership quality: moral intelligence.  Close aides reckon him as a cool, calm and collected fellow who possesses the right mental and psychological balance to take on the daunting task of charting a new course for Igbo Eze South Local Government.

But Mayor Andy is also a maverick; for it is only mavericks that can contemplate his kind of administrative principle which he calls “Zero Protocol”. Asked to explain what he mean and how he intends to seamlessly do his work without the protection of protocols, he clarified that over the years, local government Chairmen have carried themselves as demi gods. They see the led as ‘climbing instruments’ needed only when elections are around the corner. “They made themselves inaccessible and unapproachable especially to the villagers thereby barricading them from communicating their needs and that of their villages”.

“For me, the principle of zero protocol is meant to bring government closer to the rural dwellers for easy communication and adequate service delivery. And as a council Chairman, once there is a gap both in communication with the villagers then the motive of the coiners of the ‘third tier of government is defeated.

According to him, he carries out due diligence before embarking on projects or take any action, but he does not subscribe to the idea of unnecessary meetings, consultations and permissions of the “power blocks” before delivering services to his people.  “What matters most is that I am empowered by the law and strengthened by my boss, the Executive Governor of Enugu State, His Excellency, Rt. Hon. Ifeanyi Ugwuanyi to have free hand of operation”.

Close watchers of Mayor Andy’s rather unconventional style are unanimous in their conviction that his ‘zero protocol principle’ is worth interrogating for possible adoption as an administrative model, at least for leaders at the grassroots.

Confronted with the widespread rot wrought by successive absent-minded leadership of the council and mounting hardship on the people occasioned by the economic downturn in the country,  the Zero Protocol-proponent did not need any more prompting to roll up his sleeves and get to work. According to him, the dearth of critical infrastructures and social amenities – the bad roads, debilitating markets, health care needs, deteriorating schools – and the magnitude of privation in the council areas were enough motivation for him to come up with quick impact projects that will address immediate needs of the people. To this end, Mayor Andy moments after being sworn in as the Executive Chairman, identified a number of such desperate needs of the people and quickly set out to address them. 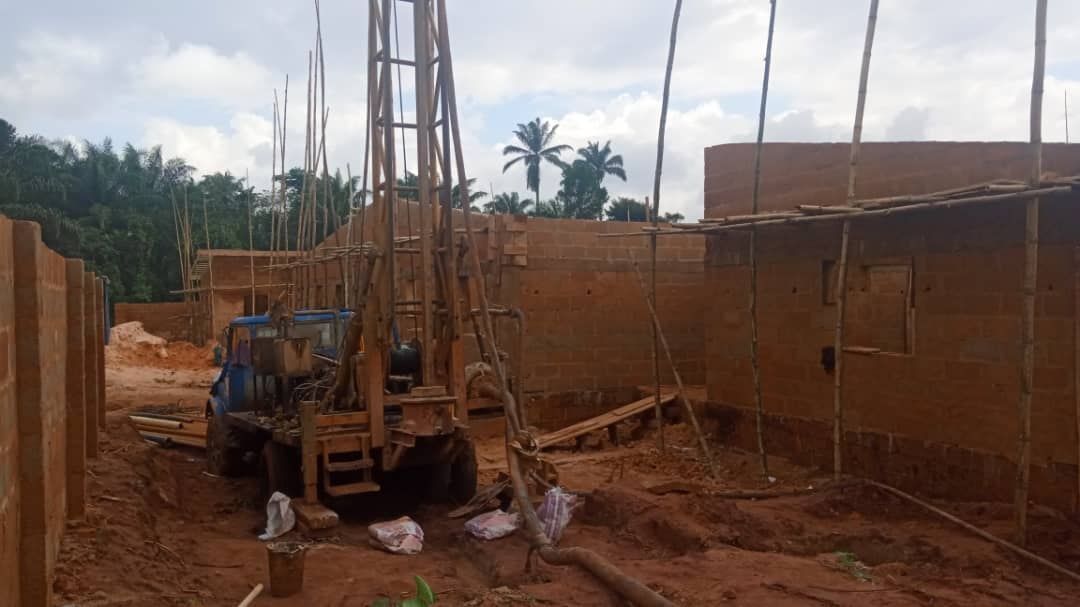 ‘Type C’ Primary Health Centre under construction at Ibagwa Aka

First on his list was to interconnect all the communities in Igbo-Eze South through road grading and asphalting. Of a truth, there is no single community in the local government area that is not seriously challenged by gross dilapidation of feeder roads. In fact, people have long resigned to fate on the impassable condition of roads in their communities which have been neglected for several years by successive local government administrations in the area.

In this age and time, most communities in the local government area depend on rain water during rainy season to have water in their homes and patronize water vendors at other times to get water. To this end, the Chairman has vowed that every community in the council area must have at least one borehole. As we write, Ikolo Ibagwa, Alor Agu and a number of other hard-hit communities in local government are bracing up for free flowing water from the boreholes he is already digging for them.

Recognizing the time bomb in having an army of restive unemployed youths across the council area, Mayor Andy has placed a high premium in designing special programmes that will engage the youths and take them off the streets. According to him, “More hands must be engaged in self-realization ventures in order to put them to productive use and as such education is planned to be strengthened starting from the learning environments to sound teachers and to programs outside official state curriculums. There are many things we plan but the resources will determine how far we shall go”.

Mayor Andy beats his chest for taking the lead in fight against Covid-19 ranging from procurement of palliatives for the people and supply of personal preventive equipment to health care workers to taking charge in ensuring adequate maintenance of the boarder s during lockdown.

The following is a rundown of the various quick impact projects that the Chairman has initiated, concluded and about to be concluded across the communities that make up his local government area in just less than 150 days in office: 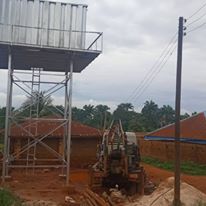 It noteworthy that these accomplishments were recorded within the short period yet he doesn’t owe salaries to any worker employed or engaged by the council rather he even gives incentives to federal security operatives in the area who are committed to their jobs.

The Chairman presented his 2021 Budget to the Council parliament, penultimate week which he termed “Budget of New Beginning”. The 2021 Appropriation for the local government, according to him, signposts his determination to lift his people from the doldrums of stagnation; this, he believes, will be accomplished through “incentivization and creation of opportunities that will encourage the growth of the local government area”. 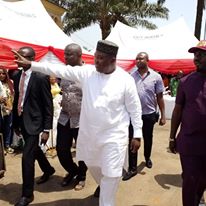 Gov Ugwuanyi and Mayor Andy in a walk…

Comrade Peter Andy does not fail to seize every opportunity to celebrate his close relationship with and loyalty to the State Governor, Rt Hon Ifeanyi Ugwuanyi. In his words, “I am eternally grateful to Gov Ugwuanyi for giving me a chance to serve my people and for the trust and confidence he repose on me to be able to deliver those services in line with his overall dream for our dear state”.

Andy revealed that on account of his close relationship with the Governor, he has been able to attract a one billion naira road project to Igbo Eze South. The effort, according to him is the governor’s way of encouraging him for his bold and uncommon initiatives. This is apart from the ongoing construction of Primary Health Care Centre attracted to the council from the state government.

When taken up on his overall mission and development template as the Executive Chairman of Igbo Eze South Local Government Area, the youthful Mayor enthused that he “Came to redefine leadership and governance at the grassroots. We want to drive fast away from the old order that never favoured us”.

And the people react…

One thing about Nigerians is that when you show them that you are genuinely ready to work for them and to lead them with a sincerity of purpose, they will reward you with unconditional love, respect and cooperation. Peter Andy is receiving unprecedented positive reviews across Igbo Eze South and beyond. To some indigenes of the area, his progressive strides are surreal and an eye opener on how much a local government administration can impact lives.

A youth activist and social media commentator, Mr Sen Chijinkem Ugwuanyi from Ovoko community who has consistently monitored the activities of the Chairman stated that the Local Government has never had such a pragmatic and progressive leader since its inception. According to him, “Andy has shown the stuff our youths are made of in terms of progressive leadership; thanks to Gov Ugwuany for giving us this young man”.

To Cosmas Chekwube Ayogu from Ibagwa Aka, Andy’s interventions in just a couple of months in office “Have us realize that there is money in the Council more than we thought and also discovered the huge amount of our money that have been misappropriated by many past Chairmen”.

Also baring his mind of the new Chairman’s accomplishment, a renowned journalist in the area, Mr Nkem Ossai, said that Peter Andy has redefined leadership at the grassroots level. His administrative style is people-friendly and the impact of leadership is unprecedented. We celebrate him”