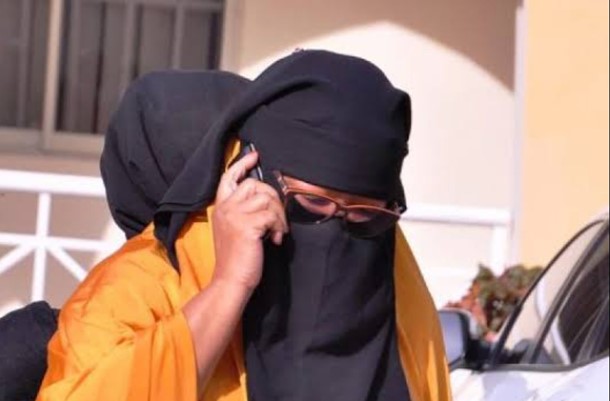 Seated outside the dock in a Maiduguri courtroom, her entire body veiled from head-to-toe with her typical adornment of niqab that leaves only a tiny opening for her pair of eyes glasses, Aisha Wakil, aka Mama Boko Haram (mother to Boko Haram), listened calmly as the judge read out the ruling on a request by her lawyer who had earlier prayed the court to grant her bail.

Mama Boko Haram was in the court to defend allegations of a multimillion-naira fraud filed against her by Nigeria’s anti-graft body, the Economic and Financial Crimes Commission (EFCC).

It was Monday, December 5, 2019. She, alongside two other suspects, Tahir Daura and Prince Lawal Shoyade, was arranged before Justice Aisha Kumalia of the Borno State High Court, Maiduguri. They were standing trial in a N66 million fraud allegation case.

The two other defendants worked in her NGO, Complete Care and Aid Foundation (CCAF).

Kumalia granted the bail but with a bail bond of N30 million and provision of two sureties who must be at the level of permanent secretary in the state. HumAngle gathered none of them was able to fulfil the bail conditions.

The EFCC charged them to court on an amended five-count charge, bordering on “conspiracy, obtaining money by false pretence and cheating, to the tune of N111.6 million”.

While they pleaded not guilty to the charges, Benjamin Manji, the EFCC lawyer,  applied for a trial date and asked the court to remand the defendants in prison pending the case’s determination.

The Judge granted this request and adjourned the case until February 10, 2020, for the commencement of trial.

That was the beginning of what now appears like an unending stay of the woman many revered for her closeness to the Boko Haram fighters.

The EFCC had continued to bring in fresh charges against her and her colleagues at CCAF – all bordering on alleged advance fee fraud. The EFCC had three different cases, one at a Federal High Court and two at the Borno State High Court.

There have been several allegations of unwholesome practices against those who ought to be providing lifesaving services for persons affected by the decades-old insurgency in the northeast.

Wakil has earned international fame for her claims to help the Nigerian Government end the insurgency by leveraging on her contacts with some members of the Boko Haram terrorist group whom she generally referred to as her “children” whenever she urged them to embrace peace.

Until her current ordeal, she bestrode the conflict arena as a major factor in the government’s efforts to halt violent extremism.

Her health status adds to her predicament during the trial- she is often lifted in and out of courtroom due to difficulty to walk by herself.

The Promises, The Drama

In 2012, she strangely led a group of supposed leaders of Boko Haram to the Borno State Government House where they promised that they could prevail on their members in the bush to lay down their arms.

The promises were made after they listed the insurgents’ terms and demands. It was later gathered that Mama Boko Haram had dragged some of the “leaders” to court for allegedly defrauding her of some money. The entire drama turned out to have likely been staged by her.

Mama Boko Haram later organised a “wailing rally” of mothers and widows in Maiduguri who addressed the media in tears while calling on the insurgents to lay down their arms and embrace peace, and also release the abducted Chibok Girls.

In November 2012, Abu Mohammed Ibn Abdulazeez, a purported Boko Haram commander, listed Aisha Wakil amongst other prominent Borno citizens, including Justice Wakil Gana, her husband, as those who could mediate for a ceasefire on behalf of the Nigerian government.

The so-called Boko Haram deputy commander, who later turned out to be a fluke, insisted that the dialogue for a ceasefire must not take place in Nigeria, but in Saudi Arabia. That dialogue never saw the light of the day.

Although there has not been any evidence of Mama Boko Haram successfully brokering a peace deal between the government and members of Boko Haram or facilitating the release of any known hostage from the captivity of the armed insurgents, she still, at some point, managed to become the only visible link to reaching across to the insurgents.

On April 24, 2013, she became a member of the Presidential Committee on Dialogue and Peaceful Resolution of Challenges in the North – a committee that was set up by the government to achieve a possible amnesty for repentant Boko Haram members.

While the committee, which was headed by Barrister Kabiru Turaki, a former Minister of Special Duties, had submitted its report, nothing much has been done concerning its recommendations.

Wakil in recent media comments said that the Nigerian government had not displayed enough sincerity in dealing with the Boko Haram insurgents and squandered opportunities for fruitful negotiations with the insurgents.

“At that time, members of Boko Haram wanted immunity and pardon for themselves and their members. If the government had fulfilled the demands, these people were ready to be disarmed and come back home,” she told Anadolu Agency.

Over time, Mama Boko Haram began to lose her steam as a trusted character with direct links to the insurgents and her waning influence continued to worsen.

Within this period, she settled to quietly run her new NGO, the Complete Care and Aid Foundation, an outfit set up to provide humanitarian support for persons affected by the insurgency in Northeast Nigeria.

The NGO was a low-profile outfit that did not attract so much public attention until the EFCC began to beam its searchlight on it late in 2018. It was alleged that the CCAF was a subterfuge for the commission of fraud.

According to court records and the EFCC, Mama Boko Haram and her colleagues had been involved in alleged multiple cases of advance fee fraud and some unwholesome enterprises that appeared more like a Ponzi Scheme.

On March 16, 2020, at the High Court sitting in Maiduguri, the EFCC presented two key witnesses before Justice Kumalia to attest to the validity of its forensic reports. The witnesses, Ismail Olaleye, EFCC’s Detective Superintendent, and George Uzuoma from the EFCC Forensic Lab, informed the court how they analysed five smartphones belonging to the three accused persons.

The witnesses said their findings from the scrutinised phones confirmed that Mama Boko Haram and her colleagues were aware of the transaction that led to the alleged swindling of the petitioner.

Mama Boko Haram and her co-defendants had earlier told the court that they were not aware of any such contracts about which they were being accused. The EFCC forensic scientist said an examination of the five phones contradicted their claims of ignorance.

“We were able to extract the WhatsApp messages, including the one that had the three accused persons discussing issues related to the alleged fraudulent contracts,” Uzuoma told the court.

The other witness, Olaleye, informed the court that he was assigned to investigate the petitions brought by one  Ali Tijjani, the  CEO/managing director of AMTMAT Global Ventures on March 15, 2019, to the Maiduguri zonal office of the EFCC.

The petitioner claimed that Mama Boko Haram and her colleagues asked his company to pay N42 million to one of their accredited suppliers to supply certain items which he later discovered were not made even after he had paid money into the account of the supplier.

It was a Ponzi Scheme?

EFCC’s detective told the court that Mama Boko Haram and her two colleagues at CCAF had a phoney programme called Project Recycling. It was a Ponzi-scheme-like enterprise that enabled them to deploy monies they collected from contractors and paid same into a purported third-party supplier’s account, and then used the money without making any supply or pay other owed contractors, Olaleye said.

“What they were doing was like robbing Peter to pay Paul,” he told the court.

“The second accused person mentioned vividly that such money paid into the third party account is called project recycling. In a voluntary statement of June 26, 2019, that project recycling involves using one of the trusted company’s accounts to obtain money deposited by others to pay money owed contractors.

“Records in the compact disk entails record of communication between the accused persons,” Olaleye explained.

He added that careful analysis showed that all the accused persons are aware and agreed on the projected recycling. At the end of the testimony, the defence counsel did not engage the witnesses in cross-examination.

The EFCC on September 14, 2020, re-arraigned Mama Boko Haram and her two colleagues (the programme manager of CCAF, Tahiru Saidu Daura, and the Country Director, Prince Lawal Shoyode), in Kumalia’s court with yet another “amended four-count charge” bordering on conspiracy, giving false information and cheating to the tune of N6  million.

The agency urged the court to strike out the earlier charges filed on March 3 and March 10, 2020, and substitute them with those of March 18, 2020.

The judge substituted the charges and ordered them to be read to the defendants.

They, Again, Pleaded Not Guilty

The EFCC has for now closed all its cases against Mama Boko Haram and her colleagues at the CCAF, which has since lost its office that was once located at Bulumkutu axis opposite the new GSM Village in Maiduguri, to a new fast-food restaurant.

HumAngle could not get sources to speak on the plight of Mama Boko Haram because the case was in court. Under Nigerian law, it constitutes contempt of court to comment on a case in a way that may be prejudicial to it.

However, Mama Boko Haram had, in a July 6 2020, publication of The Guardian told the author of an article, who accosted her while she was being taken from detention to the hospital for medical treatment, that she was innocent. The article mentioned that she insisted “she was innocent, blaming everything on the programme manager, who had handled the contracts.”

An EFCC official, meanwhile, confirmed to HumAngle that “there are many other fresh petitions being received from members of the public who are accusing Mama Boko Haram and her colleagues of similar cases of fraud”.