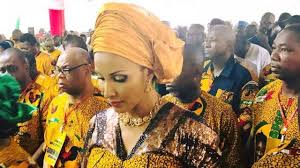 You are trampling on memory of Ikemba Odumegwu-Ojukwu, Bianca tells Governor Obiano, APGA

Widow of former Biafran leader, Ikemba Chukwuemeka Odimegwu-Ojukwu, Ambassador Bianca Ojukwu, on Sunday lamented the disrespect to her husband’s memory by the Governor of Anambra State, Willie Obiano and the All Progressive Grand Alliance (APGA), a party which proclaimed her husband as Supreme Leader until his death.

She said Obiano once said Ojukwu was dead, and was no longer relevant in the affairs of the party. She, also, said that both APGA, as a party, and Obiano as the Governor, have treated her husband’s memory with disrespect and disdain.

Bianca, who spoke on Sunday, in Awka, was reacting to questions on her conspicuous absence at the grand flag-off of the campaign of APGA Governorship candidate, Professor Charles Soludo.

She said her presence would have been an endorsement of the fraud APGA has, allegedly, become since 2018.

Mrs Ojukwu was, surprisingly, defeated in the APGA Senatorial primary under Obiano’s watch. Her defeat enraged not a few Igbo who felt she was set up for humiliation, and by extension, the humiliation of her late husband. They felt that, out of respect for the Ikemba, the ticket ought to have been given to Bianca. Since then, there has been no love lost between Bianca and Obiano and APGA.

Bianca, also, pointed out that her husband’s photograph has been removed from APGA’s customized campaign uniform, unlike the previous years, and replaced with that of Obiano, just to emphasize Obiano’s submission that her husband was dead and no longer relevant. Even then, some party faithfuls wore the old uniform which bore Ojukwu’s image. But she also found that offensive.

Her words: “It is an irony that today, Governor Willie Obiano has resuscitated Dim Ojukwu’s pictures for use in campaigning for the upcoming elections in Anambra.

“This is the height of opportunism and hypocrisy. Is Ojukwu not the same man Obiano once described as a dead man who was no longer relevant in the party?

“Why should I permit him to keep trampling on the legacy of my late husband who put his heart and soul in the party?

“Ojukwu should not be like a light switch that should be turned on for party campaign, and be turned off once election is won.”

On the campaign uniform, Bianca said: ” It is most unfortunate that Governor Obiano decided to remove the picture of Ojukwu and replace same with his own just to drive home his statement that he would no longer tie the fate and fortunes of APGA to the memory of a dead man, obviously in reference to my husband.”