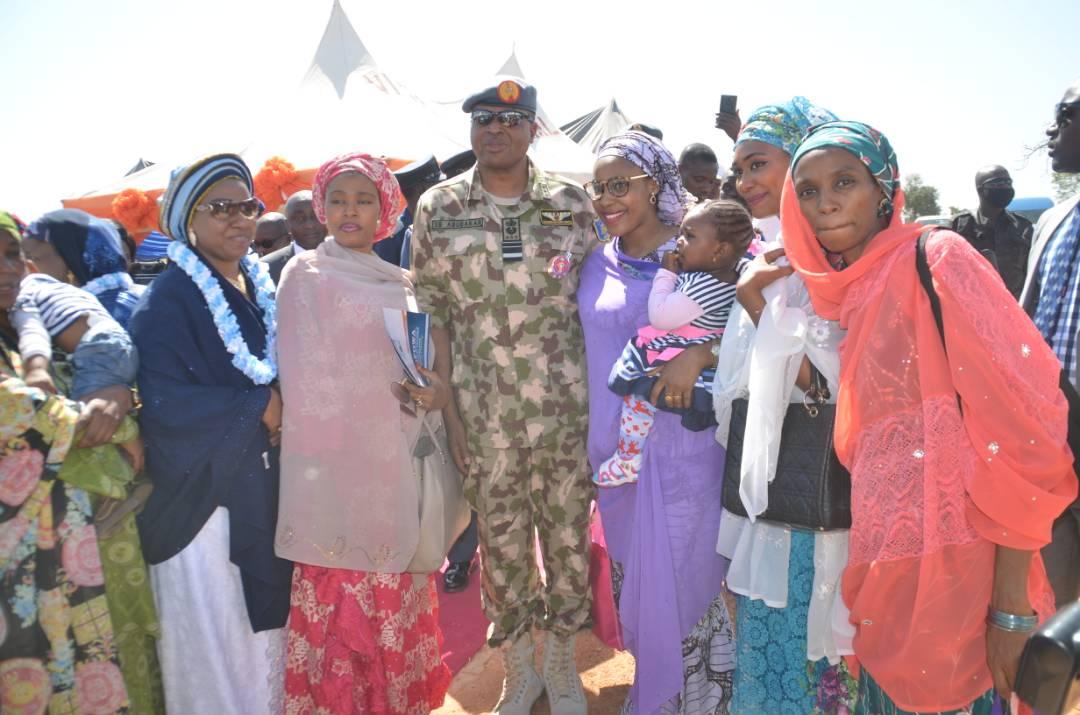 The graduands, comprising 85 women and 80 youths, were trained for ten weeks in various vocations including Computer Appreciation, Tailoring/Fashion Designing, Catering, and Confectioneries Production.

In her welcome address at the occasion, the NAFOWA National President, Hajiya Hafsat Sadique Abubakar, stated that the initial idea behind the Skills Acquisition Programme was to empower wards of personnel serving on the NAF Base in Makurdi, as most were engaged in the counterterrorism operations in the Northeast.

It was then realized that NAFOWA had to extend the programme to other NAF bases because of the obvious need.

The Skills Acquisition Programme thus became the flagship programme and focus of the current NAFOWA leadership.

According to Hajiya Hafsat Abubakar, “NAFOWA has trained and empowered over 1000 women and youths in NAF Bases at Makurdi, Maiduguri, Kaduna, Lagos and Port Harcourt in the past two years.

Many of the previous graduates of our Programme have gone ahead to establish successful and thriving businesses”.

The NAFOWA National President stated that NAFOWA believes that it has a part to play in the NAF’s Civil Military Cooperation efforts and accordingly encourages members of host communities to benefit from its Skills Acquisition Programme.

Furthermore, she reiterated her belief that “when you focus on women and youths, you cannot go wrong”.

She then expressed her gratitude to NAFOWA’s technical partners, White Empress Consult Limited, and the Association’s donors for contributing to the success of the Programme so far.

She equally appreciated all the distinguished invited guests who came to add colour to the graduation ceremony, noting that the Association had been encouraged to do even more. She was also full of praises for the Chief of the Air Staff (CAS), Air Marshal Sadique Abubakar, for his support and for always creating the time to be present at graduating ceremonies of NAFOWA’s Skills Acquisition Programme, despite his busy schedule.

In his remarks at the occasion, the CAS commended the NAFOWA leadership for initiating the Skills Acquisition Programme, adding that by doing so, NAFOWA was contributing to the welfare of NAF personnel through the building of the capacities of their dependents.

He therefore urged the NAFOWA leadership to continue the good work.

The CAS stated that he was aware that NAFOWA had different sources of funds, including those being generated from its schools.

He nevertheless assured NAFOWA that the NAF was committed to helping the Association in whatever way it could, as part of the NAF’s Corporate Social Responsibility.

Air Marshal Abubakar then directed the Air Officer Commanding Special Operations Command to make use of the graduands of the NAFOWA Skills Acquisition Programme to execute subsequent NAF projects in Bauchi.

The Special Guest at the graduation ceremony was the wife of the Governor of Bauchi State, Hajiya Hadiza Abubakar.

According to her, a stable home front was key to enabling NAF personnel function optimally in their operational assignments.

She further remarked that NAFOWA leadership had demonstrated that it was in tune with the realities of our societies by economically empowering orphans, widows and youths, amongst others. “You are no doubts adding value to the lives of youths and women in the barracks and host communities”, she stated.

The highpoint of the occasion was the presentation of certificates and starter packs to the graduating students.

The NAFOWA National President said that the starter packs being presented to the graduating students was to enable them take off smoothly and possibly later transform into small or medium scale enterprises.

The graduation ceremony in Bauchi was the Sixth Edition of the NAFOWA Skills Acquisition Programme.

Director of Public Relations and Information