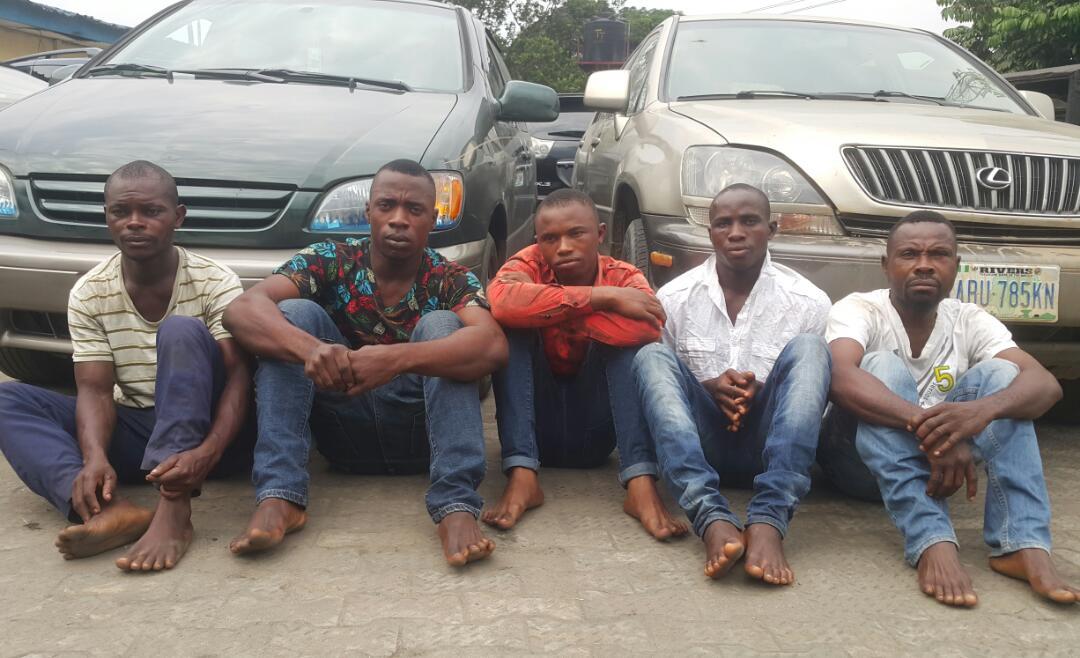 Operatives of the Inspector General of Police Intelligence Response Squad (IRT) and the Technical Intelligence Unit (TIU) have smashed a new criminal syndicate responsible for several kidnappings in the South East, who collect ransoms in US dollar equivalent.

Five (5) notorious kidnapping members of the gang were arrested by the operatives in Aba, Abia State while several AK 47 rifles ammunition and operational vehicles were recovered.

In some of the abductions carried out by the kidnap gang, victims and their families in the South East were made to pay sums ranging from N250, 000, N1million and N5.5million in US dollars equivalent.

The arrest of the notorious kidnapping hoodlums in Aba, was confirmed in a statement entitled, “Arrest of 5 Notorious Kidnapping Terrorizing Aba, Abia State and Recovery of AK 47 Rifle/Operational Vehicles”,

It reads, “Sequel to the kidnap of one Chief Felix Ogbonna, 80yrs old, on Sunday 26th November 2017 and his Subsequent release after Ransom was paid, with technical support from TIU, Operatives of IGP Intelligence Response Team IRT deployed By IGP Ibrahim Idris swung into action and eventually arrested of 5 gang members of the new kidnap syndicate.

“The kidnappers confessed to have started their Kidnapping operations this November 2017 and have been involved in three (3) kidnappings in Aba, Abia state collecting ransoms of 250k, 1million and 5.5million naira equivalent in dollars respectively.

“The suspects confessed to random kidnapping based on the nature of the vehicle being driven by their targets.

“Suspect’s names and confessed roles played are as follows: Samuel Chikaodi James AKA Chiboy 29 year old, the second in command.

He is also the driver of the operational vehicle used in the kidnappings, the negotiator of ransoms and does the pick-ups. So far he has received 3 million.

Justice Iriah AKA Mopol 23 from Edo state. While armed, he snatches and secures the hostages in the vehicle up to the kidnap den. He has so far received the sum of 300, 000.

Ikechukwu Igwebuike AKA Anambra, aged 22 years. While armed, he snatches and secures the hostages in the vehicle up to the kidnap den. So far he has received 300, 000.

Chikachi Ubani aged 30 years. He is in charge of the stronghold and detention Camp where hostages were kept.

Chineye Mark aged 45 years, is a panel beater. He hides their operation vehicle in his workshop. So far he has received 150, 000.

The Police listed exhibits recovered from the gang to include AK47 Rifle, magazine/ammunitions, the operational vehicle – one Lexus 300 jeep, and a Toyota Sienna Bus.

The statement added that effort is ongoing to arrest the 2 gang members at large and recover of more arms.