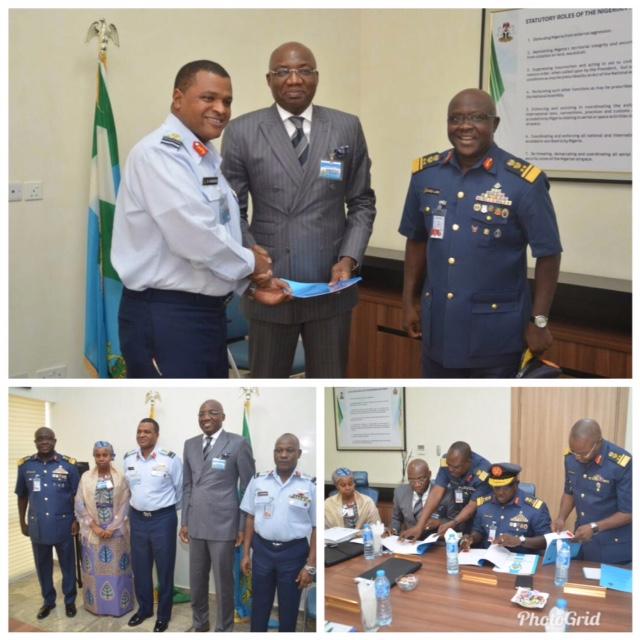 The Nigerian Air Force (NAF) on Wednesday, 24 January 2018, signed a Memorandum of Understanding (MoU) with the Nigeria Machine Tools (NMT), Oshogbo as part of the efforts of its current leadership to reinforce the culture of self-reliance.

The signing of the MoU is also aimed at furthering NAF’s strategic partnerships with Ministries, Departments and Agencies (MDAs) towards enhancing research and development.

A statement by the Director, NAF Public Relations, AVM Olatokunbo Adesanya said, “Accordingly, some of the areas of partnership identified in the MoU include training, machining, fabrication, casting as well as research and development.

“The MoU also covers the development and provision of Personal, Vehicular and Aircraft Protective Equipment.

“At the signing ceremony, which took place at the Headquarters NAF, Abuja, the Managing Director of NMT, Mr. Nobert Chukwumah, expressed delight over the opportunity given to the Company to partner with the NAF.

Mr. Chukwuma explained that the signing of the MoU would further strengthen the existing cooperation between the NAF and the private sector, which NMT is a part of, with a view to leveraging on the capabilities of both parties for the benefit of the country and the citizenry.

He added that the Company possesses the required capability and employs modern equipment in carrying out all its functions, all of which had earned the organization international recognition.

Mr. Chukwumah equally lauded the drive of the NAF for self-reliance and indicated that NMT was happy to become part of the NAF’s increasing success story.

Responding, the Chief of the Air Staff (CAS), Air Marshal Sadique Abubakar, reiterated the commitment of the Service to continually partner with MDAs so as to promote self-reliance in the NAF.

According to him, the unrelenting efforts to reposition the Service into a more professional fighting force would be boosted by harnessing all locally available abilities and resources.

“The NAF was able to identify this challenge some years back and had consequently partnered many indigenous companies as well as signed MOUs with 15 Nigerian universities.

These have resulted in huge gains for the Service, as it has enhanced the serviceability status of NAF platforms”, the CAS added.

Air Marshal Abubakar further explained that some of the gains of partnership with the University of Maiduguri, for example, resulted in the reactivation of NAF Machine Workshops in Lagos and Markurdi, which had been abandoned for over 25 years.

He added that the partnership had also led to the design and development of an Anti-Skid test bench for the Alpha Jet Aircraft, which is critical to the ongoing operations in the Northeast.

Earlier in his welcome address, the Chief of Standards and Evaluation, Air Vice Marshal Kingsley Lar, announced that the idea of the MoU was initiated after a team of visiting NAF officers discovered the capabilities and immense potentials of NMT.

He also noted that strategic partnerships with MDAs is one of the key drivers of the CAS Vision of repositioning the NAF into a highly professional force capable of adequately employing air power to meet Nigeria’s national security imperatives.

It is worthy of note that similar partnerships by the NAF with academic institutions and private institutions in Nigeria have proved significant in the efforts at securing the nation.