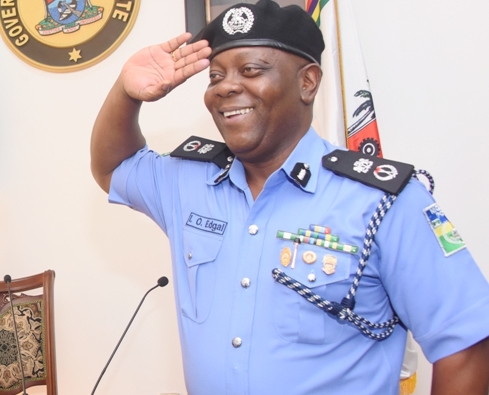 The Police in Lagos State Edgal Imohimi on Tuesday announced the smashing of a cross border and cyber-crime robbery ring who specialize in robbing owners of 4-wheel exotic cars.

Commissioner of Police, Edgal Imohimi speaking while parading 13 suspects said the police recovered over N90m worth of drugs from the suspects.

The CP disclosed that the cross border crime suspects, all Beninois, specialized in snatching exotic cars in Nigeria and driving it to Benin Republic to sell.

He narrated how a victim’s car was snatched by the gang at gun point, saying the victim had gone to use an Automated Teller Machine (ATM) when his Toyota Prado jeep was taken.

Imohimi pointed out that the gangs operations began on January 21, 2018 at Ajose Adeogun str, Victoria Island, Lagos when the owner of a Toyota Prado jeep went to use a Zenith Bank ATM.

“After using the ATM, before he could drive off, the three hoodlums that had been stalking him, forced him out of the car to the back seat and drove off.

“He was later stripped naked and dropped somewhere at Ikoyi while his car was driven away with mobile phones, a laptop computer and N45, 000 cash.

“When the hoodlums got to Ikoyi, they sighted a couple in a Toyota Jeep buying barbecue at Southern Sun area. The hoodlums forcibly took control of the car and drove the victims away.

“After a careful analysis and undercover operations, on Feb. 11, the group was intercepted at mile 2 while on a mission”.

The CP further disclosed that one AK-47 rifle, 43 rounds of ammunitions, one locally made cut to size double barrel gun, six life cartridges, one licensed plate number and assorted charms were recovered from the hoodlums.

A native doctor was paraded alongside the suspects and he is said to specialize in preparing charms for the suspects.