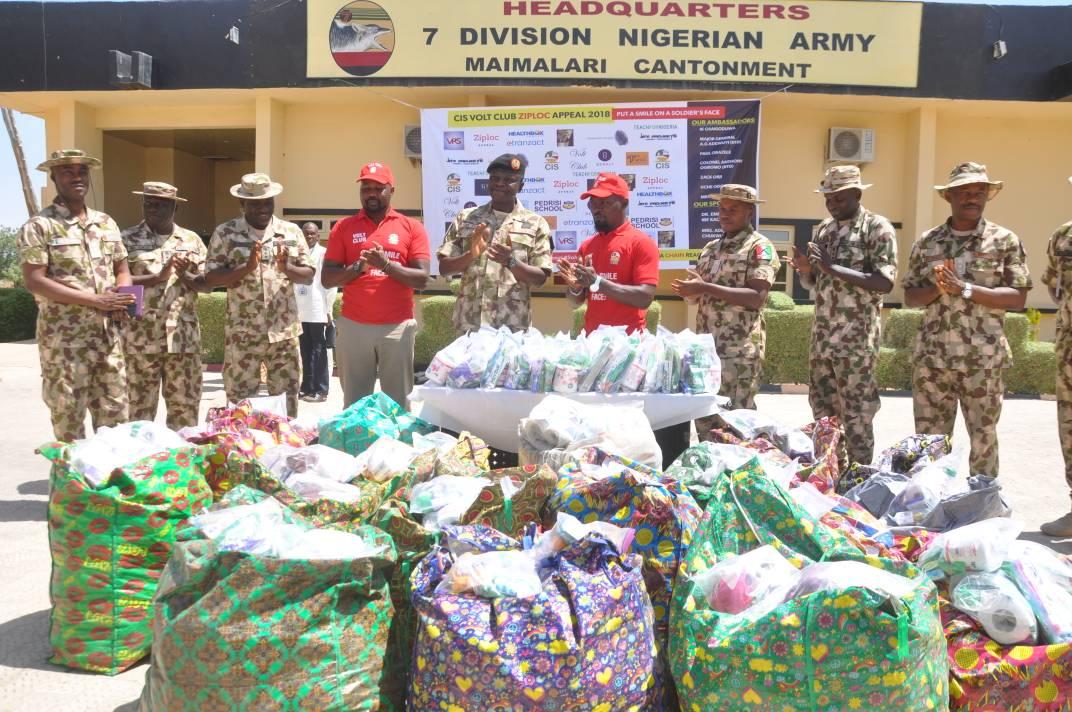 The efforts of Nigerian Army in the ongoing fight against insurgency in the North East especially the dislodgement of Boko Haram Terrorists from Camp Zairo in the heart of Sambisa forest and other numerous successes achieved by troops of 7 Division/Sector 1 of Operation Lafiya Dole is gaining commendation.
One of the latest being from pupils of Volt Club in Children’s International School (CIS) Lekki and their partners.
This gesture was shown at the presentation of about 1000 ZIPLOC to soldiers fighting Boko Haram insurgents in Northeastern Nigeria by the coordinator of Volt Club Mr. Khipan Bhila at the Headquarters of 7 Division Nigerian Army in Maimalari Cantonment, Maiduguri.
Mr Bhila stated that the pupils age 2 -16 thought it necessary to appreciate members of the military considering their selfless service in ensuring that Nigeria is safe from the hands of terrorists and other forms of insecurity.
The pupils in 2016 initiated “Thank a Soldier” project when they gave up part of their pocket money so as to get a 1000 ZIPLOC for troops fighting insurgency in Northeast and to create a chain reaction of giving to Nigerian military by launching an appeal for assistance from well meaning individuals and corporate bodies towards donating to the worthy cause.
After the success of the first ZIPLOC appeal in 2016 they expanded and got more support for 3000 in 2017. He further called on well meaning Nigerians and corporate bodies to show similar support to the Armed Forces in their service to the Nation.
ZIPLOC is a pack containing daily necessaries including toiletries, toothpaste and brush, detergents, beverages, face towels, shaving sticks, recharge cards and more importantly a hand written thank you greeting card written by the pupils in their little expressions of gratitude to the troops.
The General Officer Commanding 7 Division/Sector 1 of Operation Lafiya Dole, Major General Ibrahim Manu Yusuf while receiving the representative of CIS and their partners in his office said “this kind gesture is deeply appreciated and will spur us to do more”. The GOC promised to deliver the ZIPLOC to soldiers of the Division with priority given to soldiers in Camp Zairo within the Sambisa Forest.
It will be recalled that CIS and their partners extended similar gesture to troops of 7 Division/Sector 1 in Operation Lafiya Dole in December 2016. This is the second time the team is visiting Maiduguri with this kind gestures.
Mr Khipan Bhila and Thomas Abogunrin also stopped over at the 7 Division Medical Services and Hospital to present some packs to sick and wounded soldiers who are on admission in the Hospital.
The event was well attended by representatives of CIS and senior officers of the Divison.
Colonel Kingsley Mfon Samuel
Deputy Director Army Public Relations 7 Division