The Nigerian government on Sunday said it has paid a total of N4,642,485,146.00 (4.642 billion Naira) as Special Hazard Allowance to a total of 55,031 health workers in 35 Coronavirus (COVID-19) designated hospitals and medical centres across the country.

The governor also said through its verified Twitter account, @NigeriaGov, said that “additional payments are currently being processed.” 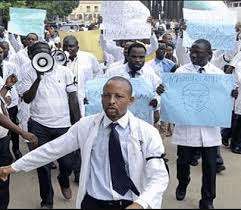 According to the tweet, “As of today, @NigeriaGov has paid N4,642,485,146.00 (4.642 billion Naira) as Special Hazard Allowance to a total of 55,031 Health workers in 35 Covid-19 designated hospitals and medical centres. Additional payments are currently being processed.”

The announcement coincided with the decision of the National Association of Resident Doctors (NARD) has voted to call off its week-long strike.

The resident doctors had embarked on strike on Monday, June 15, following a number of disagreements regarding the payment of hazard allowance and safety of health workers in the front line against COVID-19.

However, rising from its meeting on Sunday morning, members of the doctors’ union voted against the continuation of the strike.

“Dear colleagues, Rising from NARD NEC today, the ongoing total and indefinite strike action is hereby suspended and work resumes effectively on Monday 22/06/020 from 8:00 am.

“A communique to that effect will be released soonest.”

Already, the payment by the federal government has been acknowledged by a representative of the doctors’ union.

According to him, “they have paid the April and may arrears though other requests have not been met. We are hoping they will follow through on their promises.”