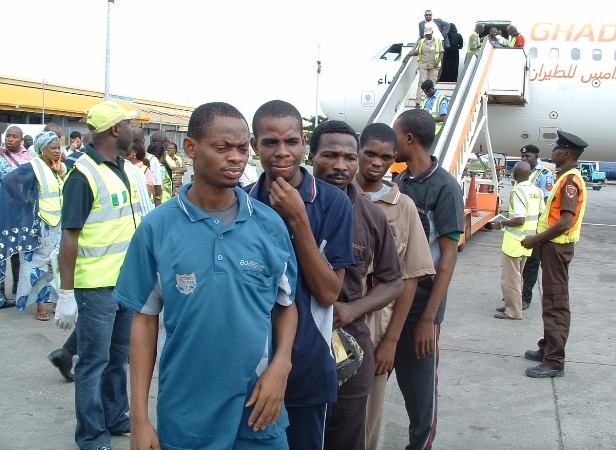 National Emergency Management Agency NEMA said on Thursday that 6, 672 Nigerian Returnees from Libya have so far been received by the Agency in the last 12 months as at December 28, 2017.

NEMA DG Engr. Mustapha Maihajja said this in Lagos, while receiving a fresh batch of 257 Nigerian Returnees from Libya at the cargo Wing of Murtala International Airport MMIA, Ikeja.

The Returnees received Thursday comprise 152 adults females, 82 adult males including 9 children and 14 infants with one medical case arrived the Airport aboard the Afriqiyah Airbus A330-300 with Registration number 5A-OMR.

The airlift of the Libyan returnees was said to have been facilitated by the International Organization for Migration IOM.

Alhaji Yakubu who received the ‘Voluntary Returnees’ from the IOM on behalf of Federal Government praised the IOM for their efforts at continuing the repatriation exercises at the time when they should be enjoying the festivities season.

He enjoined the Returnees to join hands with various government agencies to unravel the identity of ring-leaders who have been deceiving and misleading our youths into this regrettable sojourn that has led many of the victims to irredeemable losses.

He also assured them that government would treat all information with utmost confidentiality and secrecy needed.