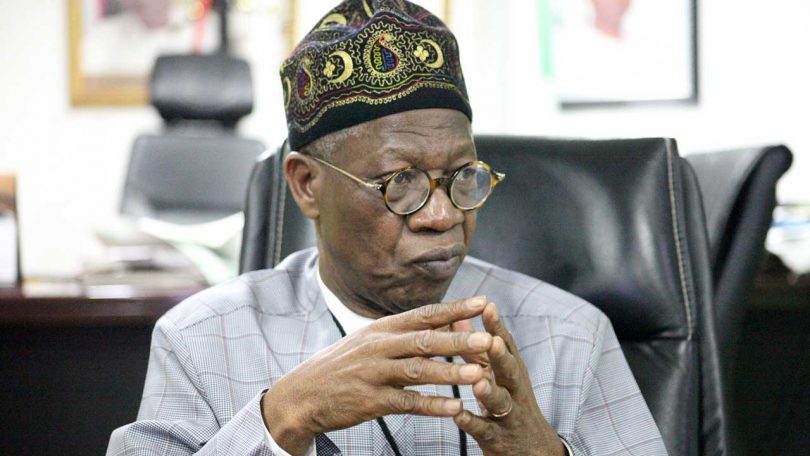 Nigeria’s Minister of Information and Culture, Lai Mohamed, has expressed his satisfaction over the tremendous progress made by the President Muhammadu Buhari led Federal Government in 2021.

Mohammed said at a Press Conference in Lagos on Thursday that the government has made giant strides in fighting insecurity, growing the economy and in some other critical areas.

He also said that in the year 2021, the administration invested heavily in reforming the oil sector to spur more investments, world class infrastructure, provision of social safety net for the poor and most vulnerable in the society as well as the Information and Communications Technology Sector.

“What we have done here is to highlight the major achievements, hence this is by no means exhaustive. Success is not measured by the number of challenges you face, but by how you tackle them. This is what the Administration has demonstrated by tackling insecurity headlong while also growing and diversifying the economy”, the Minister stated.

He said the challenge of insecurity, in no small measure reduced the already depleted resources available to the Federal Government in its developmental strides. He said the current Administration was still able to do all it did despite the plunge in resources.

He said: “Despite the enormity of the challenge, our Military has continued to live up to their billing. We owe them a debt of gratitude for their patriotism and sacrifice. We just can’t appreciate them enough.”

He said the Armed Forces of Nigeria set up various operations across the country. These include the Joint Task Force (JTF) North East, tagged Operation HADIN KAI covering the

He said the effectiveness of the military was a result of the quality leadership provided by President Muhammadu Buhari and the unwavering commitment of the armed forces. He said the procurement of modern equipments for the armed forces also went a long way in raising the level of their operational readiness and efficiency, in addition to boosting their capabilities.

“During the period under review, the Nigerian Army procured 160 MRAPS, 150 trucks and 60 APCs to improve its equipment holding. Various kits were equally provided for troops. This is in addition to the provision of accommodation for troops and the recruitment of over 10,000 personnel into the Army.

“The Nigerian Navy (NN), for its part, commissioned the FALCON EYE Maritime Domain Awareness Capability, the third locally-built Seaward Defense Boat, one helicopter, 4 inshore patrol boats and 90 Rigid Hull Inflatable Boats. Over 1,500 personnel were recruited into the Navy during the year.

“The Nigerian Air Force (NAF) took delivery of 12 Super Tucanos and 3 JF-17 Thunder Fighter Aircraft and other platforms with which it has conducted several Air interdictions, provided close air support to ground troops and destroyed several illegal structures and equipment belonging to terrorists, bandits and other criminal elements”, he said.

He also commended the Nigeria Armed Forces immense contributions to international peace and security efforts, in what he described as its robust participation in the United Nations Multidimensional Integrated Stabilization Mission in Mali (MINUSMA) and the regional initiative, the ECOWAS Military Intervention in Gambia (ECOMIG).

On the Economy, the Minister said the Country remained on a steady path throughout the year 2021. He said the World faced unprecedented challenges, starting from 2020, as a result of the COVID-19 pandemic and Nigeria was no exception. He said it was in the middle of the global crisis that the economy backslid into a recession. He said it took the quick response by the Federal Government with the rolling out of effective fiscal and monetary policies to curb the spread of the pandemic and mitigate the negative impact of the pandemic on the economy. This, he said yielded considerable results.

“Nevertheless, the Q4 of 2020 recorded a slight improvement of 0.11 percent, ushering in positive growth rates in the 3Qs of 2021. This economic performance in 2021 showed a steady improvement in growth over the last 3Qs of 2020, and this can be attributed to Government policies and strategies such as the Economic Sustainability Plan; the N500 billion COVID 19 Crisis Intervention Fund etc”, he said.

He said the passage and signing into law of the Petroleum Industry Act (PIA) is a landmark and the biggest singular achievement in the sector. He said the feat has been described by many as the most profound event in the Nigerian oil and gas space in the last 20 years. He said the PIA is envisaged to foster investment in the industry and delineate responsibilities to the various institutions.

He said the NNPC post of N287 billion profit, after tax, was the first time in 44 years that the Corporation has recorded such profit. He attributed the prudence to aggressive cost cutting measures, cost savings through renegotiation of contracts by up to 30%, improved efficiency through business automation, emphasis on commercially-focused investment and non-interference in the management of the corporation’s affairs, among other factors.

“Without question, an area in which the present Administration has distinguished itself is in the provision of key infrastructures, which is important to the growth and development of any economy. In its efforts to provide basic infrastructure, especially roads and housing, the Federal Ministry of Works and Housing carried out the following projects in 2021.

The Minister also said various highways and bridge projects at various stages of completion are ongoing across the Six-Geopolitical zones of the Country. These he said include the much-talked-about 2nd Niger Bridge, which he said is currently at 78% completion and will be ready by November 2022. He said the policies, programmes and projects of the Federal Ministry of Works and Housing have contributed to stabilizing the macro-economic situation of the country, particularly in job creation.

The Minister also highlighted achievements in the Aviation sector. These he said include the construction and installation of Boeing 737 full motion flight Simulator at the Nigerian College of Aviation Technology (NCAT) in Zaria, a development he said will save Nigeria millions of dollars spent in the retraining of pilots in other countries. He also said the most outstanding achievement in the transportation sector in 2021 was the flag-off of commercial operation of the Lagos-Ibadan standard gauge rail line in June 2021. He said trains are currently conveying goods and services and reducing traffic and human pressure on infrastructural facilities on the Lagos-Ibadan highway.

He said some 159 Rural Water Supply Schemes were constructed in the North-East, IDP camps and some Federal Institutions and Establishments by the Federal Ministry of Water Resources in 2021. He said 12 dams were also constructed. He said the Federal Government, via the National Social Investment Programme (NSIP) was able to lift millions out of poverty in the year under review.

He also posited that the Digital Economy sector was highly instrumental in lifting the Nigerian economy out of recession. He said the Q4 2020 Report on Nigeria’s Gross Domestic Product (GDP) from the National Bureau of Statistics (NBS), indicates that the Information and Communications Technology (ICT) sector recorded the highest growth rate of all the sectors of the Nigerian economy.

He said the breakdown of the different sectors shows that the 14.7% growth rate of the ICT sector was greater than the combined 14.21% growth of the 2nd to 7th fastest growing sectors in 2020.

The Minister said this Administration, in spite of daunting challenges, made tremendous progress in 2021 in fighting insecurity, growing the economy, reforming the oil sector to spur more investments, emplacing world class infrastructure, providing social safety net for the poor and most vulnerable in the society and also taking advantage of the huge opportunities offered by the ICT sector.

He thanked Nigerians for their support and perseverance and reassured the nation that the President is determined to leave a legacy of a safe, secure and prosperous Country at the end of his tenure.